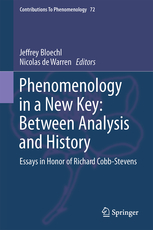 This book is of interest to those wishing to explore the intersections between the classical phenomenological canon—Husserl especially—and fields lying, as it were, on the frontiers or borderlands of this canon: philosophy of art, early modern philosophy, analytic philosophy, ethics, and ancient philosophy. In this way, it is useful to specialists in phenomenology and Husserl scholarship for the depth and rigor of the contributions as well as to those coming to phenomenology from a different corner of philosophy. This collection of essays, by some of the foremost scholars working the field, is a testament to the elasticity, resilience, and relevance of phenomenology today, and of course a testament to the impact that an individual thinker can trace upon a discourse. The contributors to this volume form a kind of constellation, each referring to the center around which they revolve: colleagues, students, friends, who take up the task of exploring territories of thinking marked out and indicated by their common referent, who, in a way, radiate from this center, Richard Cobb-Stevens. In this sense, the volume does not exaggerate its claim to give praise and honor, for to document and trace the ripples, echoes, and resonances of philosophical work in their living tissue is perhaps the highest praise. I will approach these contributions thematically, in order to give some sense of these resonances, rather than in the order in which they are presented though there will, of course, be some correspondence. First I consider those contributions concerning philosophy of art and aesthetics; second, those involved in staging a dialogue between classical phenomenology and other corners of the philosophical canon; third, those that orient themselves more within Husserl scholarship; and finally, the essay on Husserl and Aristotle.

On the matter of philosophy of art and aesthetics are the contributions by Jacques Taminiaux, “Intersections Between Four Phenomenological Approaches to the Work of Art” (Chapter 2) and John B. Brough, “The Curious Image: Husserlian Thoughts on Photography” (Chapter 3). The former offers us an index to key figures in the phenomenological movement and their views on art: Husserl, Heidegger, Arendt, and Levinas. Here we see with some force the manner in which a thinker may resonate: Husserl through Heidegger and then Heidegger through Arendt and Levinas, a rippling effect staged through the themes of the image, representation, and the status of modern art. The latter contribution, echoing the motifs established in the former, provides a detailed and nuanced account of the phenomenological status of the image as a photograph via key texts by Husserl. The essay covers the gamut of other relevant themes, including temporality, spatiality, memory, realism, and the subject.

“Hobbes and Husserl” (Chapter 4) a contribution by Robert Sokolowski, brings Husserlian phenomenology into dialogue with a perhaps unexpected interlocutor from the early modern tradition. Of course, as the author notes, Husserl’s engagement with Hobbes was somewhat unsophisticated, and thus the richness of this piece lies in the light it sheds on Hobbes’s thought, who is cast as a kind of proto-phenomenologist. Following the previous contributions on art and the image, the motif of imagination is considered in some detail. The dialogue between Husserl and the philosophical tradition is carried forward in the following contribution, “From the World to Philosophy, and Back” (Chapter 5), by Alfredo Ferrarin. In this piece, it is a Kant in dialogue with Aristotle who becomes Husserl’s interlocutor. Here there is a shift in thematic away from concerns with the image, imagination, and perceptual experience to questions of worldliness, empiricity, and transcendentality.

The dialogue between Husserl and the philosophical tradition is continued in some of the later contributions, in these cases with a shift toward staging an engagement with the analytic tradition and neo-pragmatism: “Phenomenological Experience and the Scope of Phenomenology: A Husserlian Response to Some Wittgensteinean Remarks” (Chapter 9), by Andrea Staiti, and “Thinking Fast: Freedom, Expertise, and Solicitation” (Chapter 11), by Daniel Dahlstrom. The former piece provides a necessary and relevant clarification of the sense of “phenomenology” as it was used by Wittgenstein and other analytic thinkers following his wake in contrast and in comparison to what it meant for Husserl and the phenomenological tradition. This piece can also be read as a vindication of Husserl and phenomenology in light of what is arguably a misunderstanding on the part of those working in the shadow of Wittgenstein. The latter piece continues the repartee between phenomenology and the analytic tradition through a consideration of the debate between McDowell and Dreyfus on the meaning of experience and the relevance of freedom for how we understand this. The aim of the piece is not so much to defend one or the other as it is to recast the questions raised in the context of a more nuanced and detailed reading of Husserl, Heidegger, and Aristotle. “Neo-Aristotelian Ethics: Naturalistic or Phenomenological” (Chapter 8), by John Drummond, anticipates this exchange through a consideration of the contribution phenomenology can make to more recent questions in ethics, specifically the manner in which naturalism is understood within ethics more broadly and by neo-Aristotelians more specifically. McDowell’s sense of naturalism comes under special scrutiny, and the author lays the groundwork for a phenomenologically inspired neo-Aristotelianism rooted in a nuanced sense of naturalism sensitive to the context-driven complexities of ethical experience.

In addition to these contributions oriented toward bringing phenomenology, especially Husserl, into dialogue with the various corners of the philosophical canon, an estimable task in itself, there are several important contributions that focus on Husserl scholarship and exegesis: “Vindicating Husserl’s Primal I” (Chapter 1), by Dan Zahavi, “Sense and Reference, Again” (Chapter 6) by Jocelyn Benoist, and “Transcendental Phenomenology?” (Chapter 7), by Rudolf Bernet. The first of these takes up the question of ipseity or “I-ness” in Husserl and in dialogue with Merleau-Ponty in an attempt to defend and vindicate the primacy of the first-person perspective in Husserl’s thought against a competing thesis of the primacy of anonymity. “Sense and Reference, Again” takes up this important coupling in a compelling and meticulously detailed reading of Husserl’s Logical Investigations. There is within Husserl’s theory of meaning, accordingly, the possibility of sense without a referent, a state of affairs resulting in the “unboundedness” of meaning and of fulfillment. It is the significance of adequacy in Husserl’s theory of meaning, eventually, that then must be reconsidered in this light. “Transcendental Phenomenology?” provides an overview of the meaning that “transcendental” had for Husserl, why at some point it is essential, as well as its problems and limitations, in an effort to provide clarity and dispel misunderstandings. This is done largely within the space of Husserl’s thought itself but Heidegger and Merleau-Ponty are brought in to illustrate how the idea of transcendental phenomenology was taken up and revised by some of Husserl’s readers. Ultimately, the aim here to show that the potential antagonism between phenomenology as transcendental philosophy and the natural sciences are over-stated and that phenomenology is not committed to a sense of the transcendental that would categorically exclude contributions from the natural sciences.

Throughout the entire text, another name from the canon appears repeatedly, sometimes in the foreground at other times in passing: Aristotle. At this point, the volume itself calls for the final contribution, “Aristotle and Phenomenology” (Chapter 11) by James Dodd, and as the author points out, this is perhaps unsurprising to those who knew Richard Cobb-Stevens. The aim of this contribution is to develop, with the scholarly rigor it deserves, the philosophical rapport that exists between Aristotle and Husserl. The theme that becomes the central point of concern for staging this rapport is that of seeing. It is largely Aristotle’s De interpretatione that comes under consideration in dialogue with Heidegger, who it seems would be impossible to do without under the circumstances. The aim here, however, is not simply or only to draw needed attention to the lines traceable Aristotle and Husserl but to underscore the Aristotelian debt owed by phenomenology generally, in all its forms, a debt brought to our attention by Richard Cobb-Stevens.

One of the most wonderful things about this volume is the diversity of thinkers, problems, and thematics that make contact with phenomenology more broadly and Husserl’s thinking more specifically. The true accomplishment of the volume, however, is the manner in which it couples that elasticity and breadth with scholarly rigor, nuance, and detail. The contributions are consistently well-researched and well-argued pieces that stand as worthwhile reads individually but which, when brought together as a collection, provide the reader with important insights into the significance of phenomenology for and as part of the philosophical tradition, as well as insight into issues current in Husserl scholarship today. Of course what is accomplished in this volume already directs our attention toward the accomplishment of an important individual thinker whose significance resonates across the volume, Richard Cobb-Stevens.