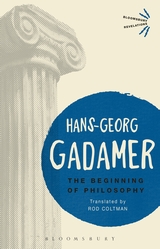 Where does philosophy begin? Often, in the West, Thales of Miletus is considered father of philosophy. Yet, if one looks Eastward towards India and China, or South towards Egypt, there are surely philosophical origins long before Thales existed. Still, in the West the presocratics are where we look to uncover the beginning of philosophical thought. While many texts have been written addressing and interpreting the presocrates and their thought, Hans-Georg Gadamer’s The Beginning of Philosophy is not one of these – at least not in the typical sense. Gadamer’s book, based on the lectures he gave in 1988 at the Naples Institute for the Study of Philosophy in Italy, does not strictly seek to explore presocratic philosophy in its own regard, but rather hopes to address the hidden origins of philosophy.

Gadamer, a renowned philosophy of the 20th Century, with these lectures, introduces a new approach to ancient philosophy. Much of the current literature on presocratic philosophy focuses strictly on the ideas generated and discussed in relation to their influence on the future development of philosophy. While Gadamer does not fall far from this in his lectures, the book’s beginning two chapters “The Meaning of Beginning” and “Hermeneutic Access to Beginning” pave the way for a unique approach to thinking about presocratic philosophy. For this review, I will focus on this new approach Gadamer suggests and then briefly discuss how this new approach to presocratic thought lends itself to a more complete system of thought, rather than a series of seemingly sporadic fragments.

When we ask ourselves “where does philosophy begin?,” it is often question answered by reference to a time, place, or individual. Interest in actual interpretation of presocratic philosophy was never really a task set forth by intellectuals until the nineteenth century romantics in Germany, with Hegel and Schleiermacher (10). Still, none questioned the very origins of presocratic thought. Why did it develop the way it did? Was it mere curiosity? Was it the myths that sparked interest in things unseen? Gadamer, thinks that there is a secret origin to which “beginning” refers. He writes that “there is yet another, far more obscure precursor – something that lies prior to all rich in tradition, prior to medical literature as well as presocratics, namely, the language spoken by the Greeks” (13).

The Greek language is well-formed to investigate philosophical questions. Gadamer notes two aspects of the Greek language which make it most suitable for philosophic inquiry as being, in the first place, the use of the neuter, and in the second, the existence of the copula (14). Regarding the former, he writes that “It has to do not with the quality of a being, but the quality of a whole space, “being,” in which all beings appear” (14). This poses Greek as a language not only capable of abstraction, but rooted in an abstraction. The copula, which relates to the actual sentence structure in Greek, refers to the “use of the verb ‘to be’ to link the subject and the predicate” (14). Together, these two important distinguishing characteristics of the language used by the presocratics, positioned them to be able to immerse themselves into what would become philosophy.

The second sense of “beginning” is reflective, in that it already presupposes an end. “The anticipation of an end is a prerequisite for a concrete beginning” Gadamer suggests (15). In other words, beginnings always have an end or goal towards which they progress. There is, then, a teleology at work in the development of history, particularly in the history of philosophy. However, this development, already contains its end within its beginning and as such, nothing given to it along its progression is innovative or unexpected. So long as “nothing new, no innovation, and nothing unforeseen is present, there is also no history to relate” and so thus the “primordial opposition between nature and spirit” enters into philosophical discourse (16).

Gadamer here offers a final consideration of the meaning of “beginning,” which is most suitable for discussing the presocratics and their role in the history of philosophy. This is “beginning” as incipience, rather than the incipient entity. This allows that “many eventualities – within reason, of course – are still possible (17). More so, it escapes a predetermined or a presupposed path – it signifies an element of “uncertainty”. Gadamer thinks this is true of presocratic thought, in which there is “a seeking without knowledge of the ultimate destiny” that their seeking will have or at which it may conclude.

After setting up the three meanings of beginning as his premises, Gadamer shifts to focusing on the history of philosophy from a hermeneutic standpoint. This is what he calls ‘effective history’ and approaches the issue of scholarship through problemgeschichte, or, “problem history.” “In this sense,” writes Gadamer, “a problem is something that impedes the progress of knowledge” (25). Thus, in different fields and disciplines, the problemgeschichte is different. In more scientific fields we must continuously seek additional confirmation, never feeling fully satisfied by the current theory. Likewise, in most fields, if we disprove a theory, it is of little to no more use.

Philosophy, unlike other disciplines, does not disregard the problem simply because any possible solution has also been eliminated. It is, then “not correct to say that if a problem admits of no falsification then it presents no question to the thinker” (26). We must therefore approach the presocratics differently than has been previously attempted. Rather than interpreting the texts out of our own vantage point, that is, via reflection, we should instead let the text itself provided us with an interpretation. This means simply that “it is not correct to assert that the study of a text or tradition is completely dependent upon our own decision making” (28).

As Gadamer continues on with his lectures on the presocratics, he uses this approach so as to only use what the text itself allows for, without filling in gaps with speculation and reasoned interpretation. Only what the texts suggest does he consider to be a valid method of understanding the presocratic philosophers and their views. In doing so, he offers a unique approach to the contemplation of the very origin of philosophic thought.

Overall, this work provides an attempt to reconsider the presocratics in a way not typically found. The approach offered by Gadamer is one which enables the reader to reconnect with the texts themselves rather than resting only upon various interpretations. While this gives one a different method with which they can approach the presocratic texts and philosophies, it does not actually result in a new way of perceiving the presocratics. No real new insight is offered into the presocratics and their views, other than some details which have perhaps at times been overlooked due to the current “survey” methods used.

Due to its depth, I would not recommend this book to anyone altogether unfamiliar with ancient Greek thought as much of the value of the book would be lost in such a case. However, this text is valuable, especially for those who study philosophy and ancient philosophy in particular. It carries with it not only the new approach offered throughout, but also a new appreciation for the presocratics which are so often overlooked or by-passed.

Doctoral Student in Humanities at Alma Mater Europaea. Currently finishing his dissertation on 'World' in Heidegger as read in a Kantian system. Dissertation committee members include: Graham Harman, Rok Svetlic, and Mark Walter View all posts by Zachary Isrow