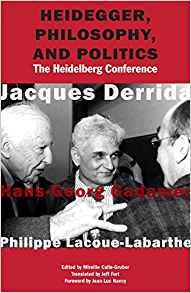 On the evening of February 5, 1988, at the University of Heidelberg, three of the major and most influential figures of the 20th-century philosophy met in Heidelberg before a large audience. Fifty five years before, in the same lecture hall, Martin Heidegger, as Rector of the University of Freiburg, had given a speech that would be part of the firsts steps towards a running sore, “a wound in thought itself” [c’est une blessure de la pensée] in Maurice Blanchot’s words[i], a proper caesura, entitled “Das Universität im neue Reich” [The University in the New Reich]. Jacques Derrida, Hans-Georg-Gadamer, and Philippe Lacoue-Labarthe, three unquestionable distinguished Heidegger’s interpreters, came together that February of 1988 for over two days to discuss the philosophical and political implications of Martin Heidegger’s thought and legacy, under a Gadamer’s sign of hospitality: the encounter took place in the common linguistic territory of the French language. Heidegger, Philosophy, and Politics: The Heidelberg Conference, edited by Mireille Calle-Gruber, and translated into English by Jeff Effort, collects the fruitful dialogues between these three thinkers and their exchanges with the audience during this unforgettable debate officially entitled “Heidegger: Portée philosophique et politique de sa pensée” [Heidegger: Philosophical and Political Dimensions of his Thought].

Days after the conference, once the text of the public debate was ready, Derrida, Gadamer, Lacoue-Labarthe, but also, Calle-Gruber—who was in charge of the presentation—and Reiner Wiehl—president of the session—, all of them, agreed to defer the publication[ii]. Those were unquiet days: only a year before had been published the “spectacular” book by Víctor Farías, Heidegger et le nazisme[iii] (1987) and, by the time of the Heidelberg Conference—partially motivated by the whirlwind generated by the Farías’ book—the media focus was as never before concentrated on Heidegger’s documented Nazism (which was already known from the 1960s, provided by Guido Schneeberger[iv], as Gadamer remembers[v]). Both Lacoue-Labarthe[vi] and Gadamer[vii], as it is well known, had largely discussed Farías provocative book, and had considered that was written not without recourse to misrepresentations and malicious omissions. Farías also devoted himself to denounce not only Heidegger Nazism but the so-called “heideggerianism”, especially what he understood as its French decline: Jean Beaufret and Jacques Derrida, both unfairly associated to Robert Faurisson and his revisionist-negationist theories regarding the non existence of gas chambers in the nazi concentration camps. Thus, the gadamerian decision that the conference be delivered in French, besides representing an act of generosity, acquires a new meaning.

Derrida, Gadamer and Lacoue-Labarthe faced in this conference the complexities of the discussion on a shared ground, each resorting to their own considerations while attempting to set up a dialogue (despite the manifest intention, at least from Derrida and Lacoue-Labarthe, of not giving a full account of their own most well-known published texts). To begin, Lacoue-Labarthe invoked his thesis on the confrontation, “the inmense debate”, that Heidegger, after the rectorship at Freiburg, would have started with what National Socialism meant in the history of the West, through the calling of art into question and the deconstruction of Western aesthetics, that is to say, the understanding of the essence of tékhne [viii]. One of the central thesis of Lacoue-Labarthe, that is present in his participation in the conference, is that the question of art occupies a nodal place in Heidegger’s self-interpretation of the enigma of his own political commitment, since it would constitute his self-confrontation with National Socialism, his own Auseinandersetzung subsequent to the experience of the Rectorship. After 1934, Heidegger introduces poetry and the poet figure as the main references for the reflection on the German identity and, in this way, Nietzsche’s previous dominant influence begins its decline to give way to the new hero: Hölderlin. The terms in which the myth and the tragedy would be thus later understood will not be those of the great German mimetic dream of Greece proper to nazi Wagnero-Nietzscheanism, but those of Dichtung, Sprache and Sage, which, in turn, overflow the aesthetic determination of the poetic.

Gadamer, contributed to the conference with both his irreplaceable reflections and testimonies, but also reopening the interrupted conversation started in April 1981 at the Paris Goethe Institute with Jacques Derrida. Therefore, Gadamer’s intervention was focused, on one hand, in its testimony value, maybe because the questions of the audience had conducted him too much in this way. In this respect, “surprise” and “shock” are the recurrent adjectives he used for describing what was then in 1933 his reaction to Heidegger’s Rectorship chair acceptation, indissociable of the latter’s public nazi commitment, specially when he had seemed to Gadamer politically much closer to National-Bolshevikism[ix] (which, in the eyes of Gadamer, as political Movement, had not a biologicist discourse). The main hypothesis of Gadamer is that Heidegger really believed for a moment that the nazi revolution was the possibility of a true spiritual renovation, but once he understood Nazism had become not more than a “decadent revolution”, it was for him no more his revolution, he felt no responsible at all for anything. And that would explain his great ambiguities: first of all, his silence. But also the responsibility with respect to the great number of colleagues and students who followed him in his political decision together with the disturbing contradiction of writing contemporary on the “forgetting of being”, the predominance of technics and the devastating consequences of the industrial revolution.[x] On the other hand, Gadamer presented a critical point of view of Heidegger’s path to the “fragmentation of metaphysical conceptualization by means of this force he exerted against words”[xi], that involved a similar consideration regarding to Derrida, and that allowed Gadamer to understand himself closer to Paul Celan and his sense of fragmentation.

Derrida, for its part, during the conference superbly questioned Heidegger’s own questions and avoidances, as well as the meaning of legacy and responsibility. He asserted—by way of an improvised and risky hypothesis, later shared by Lacoue-Labarthe and Gadamer—that Martin Heidegger’s silence, his unforgivable silence in the face of the barbaric horror of Nazi extermination, is the legacy that has bequeathed us. In Derrida’s words:

What I am saying here is very risky, and I risk it as a hypothesis, while asking you to accompany me in this risk. […] with a phrase spoken in the direction of an easy consensus, Heidegger woul have closed the matter. […] I believe that if he had let himself go for a statement, let’s say, of immediate moral reaction, or of a declaration of horror, or of non- forgiveness—a declaration that would not itself be a work of thought at the level of all that he had already thought—, well, perhaps we would feel more easily spared the work that we have to do today: because we have to do this work. That is what we have inherited.[xii]

This hypothesis is, ultimately, the beginning of a response, an answer to the question of responsibility of thought. On the one hand, improvisation would be a kind of responsibility by means of risking a disarmed speech.[xiii] On the other hand, to be heir to a legacy supposes always a response, the act of responding for not only a call not chosen, but also one that comes before oneself[xiv]. This is the call that Farías book wanted to mute, the path this book tried to close by doing a “case closed” out of the Heidegger nazi commitment. For this commitment was not in 1988 nor now something someone can put into question. Heidegger’s Nazism is indisputable. But to be heir to a legacy in the sense Derrida expressed it means a response to the dogmatic question where Faría’s book seem to lead: “is it posible yet to read Heidegger?”.

Somehow, today the 1988 scenario recurs. The publication for the first time of the Heidelberg Conference in 2014, in its French first edition[xv], concurrent with the beginning of the publication of the Schwartze Hefte in Germany, revealed a “dislocation” [décalage], as Jean-Luc Nancy has said[xvi], which comes not only from the very root of the problem itself, the relationship between Martin Heidegger and his political commitment with Nazism, but also from the mediatic racket generated by the very publication of the Schwartze Hefte themselves.

The process, begun in 2014, of the gradual publication of the Schwartze Hefte, which are loaded with resounding anti-Semitic expressions (that occupy a new and important place in the philosophical work of Martin Heidegger, although are not the only elements of these books), challenges us today to think, demands pronouncements and explanations, in a climate of opportunism, confusion, obscurantism and controversy as it was that of the late eighties. Once again, the mass media (but not only the media) raise a false alternative that may be summarized as it follows: “If he was a great philosopher, then he was not a Nazi; if he was a Nazi, then he has not been a great philosopher”[xvii]. Thus, the task would be enormous for the heirs: none other than the terrifying and valuable mandate to think what Heidegger did not think, to say what he was not able to say[xviii], namely, the affinities and common roots among his thought, the essence of the West and Nazism; the subject of Nazism by itself; the basis for his National-Socialist engagement.

Nowadays, the publication of the Schwartze Hefte came to dispel the silence, but did not liquidate the task. In any case, today there is no way to avoid the inevitable. As Donatella Di Cesare said:

Even the stereotype of the philosopher lying in an impolitic conformity seems totally unmotivated. Heidegger was by no means a “conformist” and in the Black Notebooks—as in other works of the thirties—appears a politically radical philosopher. It will therefore be necessary to rewrite the chapter “Heidegger and politics” which promises to be much more complex than what has been assumed so far[xix].

That chapter today is beginning to be rewritten, little by little. To be sure, Donatella Di Cesare and Peter Trawny[xx]—editor of the Schwarze Hefte, published by Klostermann—provide today the most penetrating and accurate analysis on Heidegger’s anti-Semitism (although each one from a different point of view). In particular, in direct relation to one of the main reflections that the publication of the Heidelberg Conference brings up, Di Cesare dedicated half of his Heidegger & Sons. Eredità e futuro di un filosofo (2015) to face the problem of Heidegger’s legacy. Two paths seem to be shaped in the face of the intellectual inheritance of the German thinker. On the one hand, “orthodoxy”, which either denies or trivializes the status of Heidegger’s political statements, reacts with loyal impotence, marginalizing texts, problems, even people. On the other hand, a spectacular parade of pamphleteer whistleblowers sets out to hunt down the “Heideggerians”, suspected subscribers of any action or omission of Heidegger. Of course, these are false options that take us to just a single alternative: refusing to think. For, as Di Cesare affirms, “an inheritance is never something that can be either fully received or, on the contrary, totally refuted”[xxi]. We are heirs, whether we want it or not; that means having to learn to be both faithful and unfaithful[xxii]. Reading Heidegger, Philosophy, and Politics: the Heidelberg Conference will not dissipate the new questions that the publication of the Schwartze Hefte opened, but may give us both a vision of a path that must be understood as well as an understanding of some initial conclusions of three major philosophers that should be necessary overcome if we are really willing to confront once again to the challenges posed by Martin Heidegger’s thought.

[vii] Published originally as “Zurück von Syrakus?”, in Die Heidegger-Kontroverse, ed. Jürg Altwegg (Frankfurt am Main: Athenäum, 1988), 176-79; later was published in French in Le Nouvel Observateur, January 22-28, 1988, translated by Geneviève Carcopino. It was also translated into English as “Back from Syracuse?,” trans. John McCumber, Critical Inquiry 15, no. 2 (Winter 1989): 427-30. The English version of Gadamer’s text was included in the edition here reviewed.