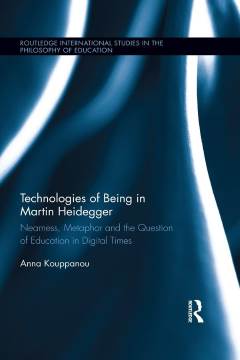 Technologies of being in Martin Heidegger

nearness, metaphor and the question of education in digital times

Technologies of Being in Martin Heidegger attempts to deepen the dialogue between philosophy of education and philosophy of technology, while engaging with the thought of Heidegger, Jacques Derrida and Bernard Stiegler. Through a critical reading of Heidegger’s central notion of nearness, this book argues that thinking is intricately conditioned by technologically produced images, which are themselves interacting with imagination’s schematizing power. The book further discusses how certain metaphorical synthesising processes, which are currently industrialized taking the form of social networking sitesand search engines, discretise human behaviour and reorganise it in ways that often marginalise human interpretation and redefine nearness. Finally, it suggests how we might reconceptualise technology and education as processes of human individuation.

Kouppanou, (2017). Technologies of being in Martin Heidegger: nearness, metaphor and the question of education in digital times, Routledge, London.

A. Kouppanou, Technologies of being in Martin Heidegger