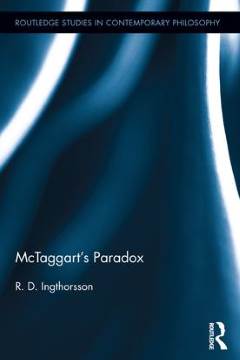 McTaggart’s argument for the unreality of time, first published in 1908, set the agenda for 20th-century philosophy of time. Yet there is very little agreement on what it actually says—nobody agrees with the conclusion, but still everybody finds something important in it. This book presents the first critical overview of the last century of debate on what is popularly called "McTaggart’s Paradox". Scholars have long assumed that McTaggart’s argument stands alone and does not rely on any contentious ontological principles.The author demonstrates that these assumptions are incorrect—McTaggart himself explicitly claimed his argument to be dependent on the ontological principles that form the basis of his idealist metaphysics. The result is that scholars have proceeded to understand the argument on the basis of their own metaphysical assumptions, duly arriving at very different interpretations. This book offers an alternative reading of McTaggart’s argument, and at the same time explains why other commentators arrive at their mutually incompatible interpretations. It will be of interest to students and scholars with an interest in the philosophy of time and other areas of contemporary metaphysics.