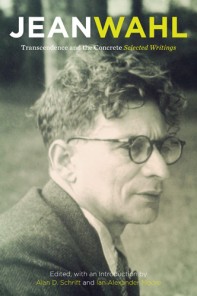 ‘Packaged as Meat, Frenchman Jean Wahl Flees Nazi Captors in Dramatic Escape’. So reads the 1942 newspaper headline reporting one of the more sensational escapades in the philosopher’s life (6–7, n. 15). Jean Wahl is one of a number of neglected existentialist thinkers who were opponents or victims of the Nazi régime. Philosophers in this tenuous position could no longer (if they ever had) regard their philosophy as separable from the concrete life that made it possible and otherwise informed it. For this reason, the editors’ thoroughly researched introductory essay, drawing on unpublished biographical material, is one of the most valuable features of the collection under review. After the Vichy Statute that excluded Jews from teaching, as the essay explains, Wahl continued to lead seminars from his hotel room on rue des Beaux-Arts. On the day that the area was seized by the Gestapo, Wahl, who was reading Heidegger with a small group of students, is reported to have quipped, ‘If the Gestapo comes, it will not hurt to say that we are studying Heidegger. The Nazis at one time thought highly of him.’ (4).

The memorable newspaper headline refers to Wahl’s eventually successful attempt to escape from occupied France in a ‘butcher cart’, ‘wrapped in the same kind of cloth that wrapped the sides of meat’ (Green cited on 6). This earthy image of the philosopher, the archetype of consciousness and reflective thought, packaged up as inanimate, unthinking flesh is astonishing and suggestive. It may even express the quintessence of the human condition. Is there not a sense in which to be ‘packaged as meat’ is simply to be human?

The question is at the centre of the main theme of this collection of essays: the relationship between transcendence and the concrete. In the volume’s final essay, Wahl explains his and his contemporaries’ preference for the word ‘existence’ over the more archaic ‘soul’:

As the editors point out, Wahl was ‘a sensitive and insightful reader’ and interpreter of the work of his contemporaries (2). Notably, he promoted in France German philosophers, including Martin Heidegger and Karl Jaspers (24–5), but his own philosophical voice can be heard in the engagements with other thinkers’ work that are presented in this collection (2). Wahl’s extensive engagement with Jaspers is of particular interest (chs. 6 & 7).

The volume partially reprints ‘The Problem of Choice: Existence and Transcendence in Jaspers’s Philosophy’ (Chapter 6), in which Wahl engages in detail with Jaspers’s complex philosophical system, focusing on those aspects which are of most relevance to his own thinking and which matter to him the most. He begins with the important observation that ‘Jaspers’s philosophy is both the negation of every system and the affirmation that a system is necessary for the intensity of the life of the mind.’ (134) Jaspers’s thought, as Wahl sees it, is based on two propositions, the first of which forms the basis for the second, even as the two propositions oppose and strive to negate one another. Wahl thus makes sense of an otherwise puzzling feature of Jaspers’s work: the tension between its apparently systematic form and its profoundly anti-systematic content. ‘There is…a struggle,’ Wahl says, ‘between philosophy and the form of the system; it always stands outside of the system and breaks it.’ (136)

Wahl’s essay on Jaspers shows just how thoroughly this collection has been edited. References are given to the German edition of Jaspers’s three-volume Philosophy and also, where possible, to E. B. Ashton’s English translation (134, n. 4). The editors also provide an English translation of Wahl’s French translations of Jaspers’s German, which can differ significantly from the published English translations of Jaspers. They also helpfully correct apparent errors in Wahl’s references. However, sections III and IV of the Jaspers essay (‘Transcendence’ and ‘The World of Ciphers’) have been cut ‘for reasons of length’ (147, n. 46). This is unfortunate, because these are the sections that are of most relevance to the theme of the volume as a whole. In these excised sections, Wahl sets out some of the formulas used by Jaspers to articulate the relationship between ‘transcendence’, which is ineffable, and the essentially ambiguous and unstable ‘ciphers’ in which, for Jaspers, transcendence is embodied in the world of concrete experience. In the conclusion to the essay, Wahl holds up Jaspers’s ‘cipher of failure’ as a major link between Jaspers’s theory and some of his own deepest philosophical concerns. But, for Wahl’s explanation of that theory (which is located in the excised section IV), the reader must look elsewhere (147 n. 46). The editorial decision to omit these two sections of Wahl’s text left this reader with the sense that the editors have at times focussed on details at the expense of the broader picture.

‘Subjectivity and Transcendence’ (ch. 7), offering a valuable transcript of the December 4, 1937 session of the Société Française de Philosophie, shows Wahl in living dialogue with some of the most important philosophers of the day. We hear Wahl’s philosophy emerging out of conversations with Martin Heidegger, Gabriel Marcel, Karl Jaspers, Nicholas Berdyaev, Emmanuel Levinas and others—either in person or by letter. Of particular interest are the lengthy transcribed conversation between Wahl and his friend, Gabriel Marcel and Wahl’s insightful articulation of a particular reservation he has about Jaspers’s thought. On the latter, Wahl states:

While Wahl acknowledges the importance of Jaspers’s work, for the reason given above, he regards it as ‘no longer necessary to place his philosophy within the same framework as the others’ (164). Rather than being ‘one of the most serious reproaches one could make against Jaspers’s theory’, this is a profound insight into the distinctive nature of his philosophy (164). For what could ‘a general theory of philosophies’ be, if not itself philosophy? And is this not precisely the most authentic kind of philosophy that we need, as opposed to the unreflective choice of a particular cipher, made in ignorance of the fact that ciphers are what are being chosen or even (our inescapable rootedness in traditions notwithstanding) that there is a choice to make? As Jaspers says in his letter to Wahl (on a different point), ‘what you designate as dangers is exactly what I would like to achieve, at least as I conceive it’ (191).

Overall, Transcendence and the Concrete makes an important contribution to the study of the life and thought of Jean Wahl and his contemporaries. Its transcript of the 1937 session and detailed biographical essay will be of particular value to scholars and students working in the field.