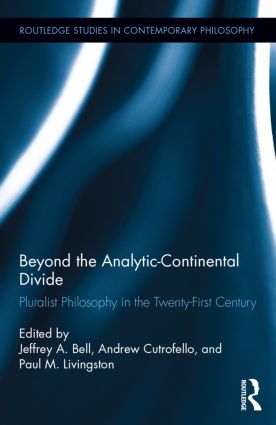 This collection of papers, which covers a wide variety of philosophical topics, aims to go beyond a discussion of differences between analytic and continental philosophy. Instead, the collection purports to show the results of philosophers whose work combines both traditions – synthetic philosophy, as the editors call it. The aim is not just to mash together malleable work from the two traditions, but to consider philosophical projects in the light of a more fully fledged set of contributions than would be available if working from within one tradition only.

Questions about the overall aim of this project might include, first; will it result in new philosophical projects, perhaps crossing boundaries of the traditional philosophical sub-disciplines, such as epistemology, ethics and so on? Second, how will the success of these projects be assessed; both at an overall level and at the level of criticising and reviewing individual papers? In answer to the first, we should note that the collection came about through new collaboration on the internet. A paper on connections between Derrida’s deconstructive notion of ‘the undecidable’ and Kurt Godel’s formalization of that problem in arithmetic was the starting point for discussion, which drew in a number of participants. Technology thus makes it easy to establish a ready community of philosophers who are able and willing to take up the challenge of this sort of philosophy, and it is equally easy to imagine that new projects will be generated in this way. Judging the success of the resulting philosophy as a whole will be more difficult, at least initially. Presumably, it will require an established group of philosophers, who have been practising synthetic philosophy for a while to comment authoritatively on the overall output, rather than relying on specialists in individual philosophers or particular areas of study. The group will also need to reach critical mass, too, in order to avoid synthetic philosophy becoming yet another philosophical niche industry. Most contributors come from universities in the USA, and it would also be fruitful if the project were taken up elsewhere.

The collection is in four parts. I shall comment in detail below on the first part, Methodologies, since by its very nature it has a bearing on any synthetic philosophical project and therefore has a relevance to all papers in the collection, but I will deal briefly with the other parts here, mentioning only those papers which throw up something of interest for the overall project, rather than merely being of merit in themselves.

The second part, with four papers on Truth and Meaning, contains an important paper by David Woodruff Smith, titled Truth and Epoche, which uses Tarski’s semantic conception of truth to provide a phenomenological analysis of truth as it occurs in experiencing consciousness. Husserl and Tarski are not unexpected bedfellows (both mathematicians by training) and so a discussion involving both philosophers has a naturalness, which is perhaps not so true of another paper in the section, Metaphors without Meanings: Derrida and Davidson as complementary by Samuel C. Wheeler III. Derrida and Davidson are chalk and cheese; good examples of the ‘opposite poles’ of the continental and analytic tradition, and whilst Wheeler gets something out of the comparison, the paper feels slightly forced in an attempt at synthesis.

An example of a new question emerging from synthetic philosophy is the first paper in the third section, Metaphysics and Ontology: Why is Time Different from Space? by John McCumber. To explore the question, he starts by assuming that there was a situation when time and space were indistinct and that we may have experiences of that. Part of his paper revolves around the novel concept of ‘co-occupancy’ together with the idea that time and space originate in place, which is itself a dynamic set of ‘nearing and farings’. This is in danger of sounding fanciful to the analytic philosopher, but it is saved from obscurity by a wonderfully vivid literary example and illustration from Graham Greene. The second paper in this section, Wittgenstein Reads Heidegger, Heidegger Reads Wittgenstein: Thinking Language Bounding World by Paul Livingston, like the Husserl and Tarski paper, gives the impression of a very smooth comparative feel as the author basis his paper on actual quotations about each other by the two respective philosophers.

In part four of the collection, the first paper, Relativism and Recognition by Carol Rovane is a wide ranging discussion on how we should understanding relativism, taking in contributions from Axel Honneth, Bernard Williams and Habermas. The paper has the merit of stepping back from the narrow confines of discussing moral relativism and thinking about our position in different communities from a ‘world view point’. Revolutionary Actions and Events by Andrew Cutrofello in the same section is a less successful paper from the point of view of drawing in the analytic philosopher (and the reviewer is one such), mainly because Badiou is supposed to contribute to the interesting discussion of Arendt’s view on revolution and the nature of events, but it is hard to see how he does this, even on a sympathetic reading. The paper raises the problem of how some opaque continental philosophers can be treated in a way which will lead to a genuinely synthetic philosophy, rather than one which is lop-sided in favour of one or other tradition.

To sum up, the papers include happy pairings with productive results (Husserl and Tarski, Wittgenstein and Heidegger), a new question about time and space forged out of the synthesis, a wider perspective on an old problem and some papers which do not quite achieve synthesis.

The most successful part of the book overall is the first part which deals with methodologies. Despite the editors’ claiming to want to avoid old-style discussions of the analytic/continental divide, the first paper by James Conant represents something of a reprise of the theme of the origins of analytic philosophy and what it means to contrast analytic and continental philosophy. It does an excellent job in opening the collection. His analysis of how the ‘founding fathers’ of analytic philosophy described their philosophical enterprises provides a good insight to start the set of papers. Conant reminds us that the early analytic philosophers could not know that they were ‘founding’ anything; they were reacting to existing philosophy (Kant and Hegel and British Idealism, for example) and trying to establish how philosophy should be done. Is analytic philosophy determined by its content, method or style? Conant notes that some in the tradition, such as Williams, McDowell and Murdoch, come to reflect on the point that the way philosophy is done may establish, or at least constrain the content, for good or ill. Conant also notes the increasing trend to ‘excommunicate’ members of the analytic community when they show tendencies ‘to swim in the waters of rhetorical metaphysics’ (to borrow a phrase from Crispin Wright’s review of John McDowell’s Mind and World, quoted by Conant). Conant considers that what sparks such criticism might be both a slip into vices of style connected with continental philosophy (fuzziness, extravagance of metaphor and so on) and the fear that the sort of philosophy will lead others astray. Analytic philosophers have adopted some humility, however, and this is shown in their attitude to the history of philosophy. There is now a more sensitive approach to philosophers of the past, which goes beyond being forced to treat them as though they were present day contributors to Mind. Two very recent, exciting trends highlighted by Conant are first, the development of analytic studies of historical philosophers previously ‘banned from the canon’ such as Hegel and Marx; and secondly, the interest in the history of analytic philosophy itself. Historians of analytic philosophy must be philosophers as well as historians, as they challenge the current philosophical thought with their interpretations, he thinks. Philosophy, unlike science, is necessarily ill at ease with itself, Conant suggests, because it seems that some issues will never be resolved. There will just be different ways of discussing them. The historian of analytic philosophy has an important role in that he helps to establish the ‘tradition’ of analytic philosophy, and it is this concept of tradition which will give analytic philosophy its sense of self.

The second paper in this part, on Austin and Deleuze by Richard Eldridge and Tasmin Lorraine, rather neatly picks up the theme of history and the temporal perspective in philosophy. Austin’s reflection on language, where a word does not have a fixed meaning and consequently the study of philosophical concepts is more shaking and unsettling than some suppose, is linked with Deleuze’s insistence that we should take temporality into account in philosophical discussion. For Austin, concepts evolve; for Deleuze, they are ‘events’, perhaps best understood by his reference to cinematography or art. The paper makes no demand on the reader to change linguistic gear from the analytic to the continental style and, as such, is a successful representation of the synthetic philosophy promised in the collection.

The third and last paper in this section is an active realisation of Conant’s remarks about history and analytic philosophy, whilst at the same time garnering inspiration from Foucault. Catarina Dutilh Novaes is a historian of the philosophy of logic and her paper extols the merits of a genealogical approach to philosophical concepts. This is a historical approach focussed not on authors but on concepts such as logical form. By tracing the genealogy of such a concept we are able to appreciate various influential factors such as the straightforward historical context (how a concept is used at a particular time) and the ‘layering’ that takes place over time. The conceptual genealogy of philosophical concepts will provide us with an explanation of the historical shaping of such a concept through time, thereby widening the space of theoretical possibilities.

The impression at the end of the first section is that the papers are written with a view to justify the project of including continental philosophy in what are essentially concerns of analytic philosophy. Papers in the later sections come from contributors who are either situated in the continental tradition or who are happy to travel close to the borderland between analytic and continental philosophy. The whole purpose of the collection is of course to encourage the reader to jump beyond those boundaries and it is very successful in doing so.