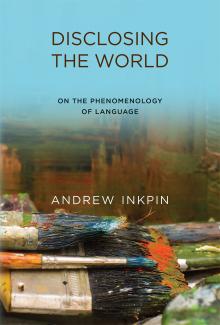 Disclosing the World: On the Phenomenology of Language
Andrew Inkpin
The MIT Press
2016
Paper Text $43.00
400

Andrew Inkpin’s book, Disclosing the World: On the Phenomenology of Language, is an original and sophisticated account of the processes involved in linguistic disclosure—the role that language plays in revealing the world. In particular, Inkpin is centrally concerned with the experiences speakers have of language and its ability for them to, in effect, come to know the world through those experiences.

Inkpin understands phenomenology in terms of our ability to give an account of the experiential surface (p. 9) and uses phenomenology to study our experience of language (understood as an artifact). He argues for a “minimalist phenomenology,” which is an attempt to “describe accurately how things appear or manifest themselves” (p. 6). His goal in adopting a minimalist phenomenology is to describe accurately the way language is experienced by speakers. Since speakers typically do not speak in isolation from others, an account of how speakers are experienced by their respective audiences would also be expected. While Inkpin does make some progress in this direction, with his understanding of language as language-in-the-world, through his use of some speech-act theory as presented by Searle, his account would have been strengthened from a discussion of Gricean speaker-meaning insofar as speaker intention and recognition of that intention impacts our understanding, and, in effect, experience of language.

Some of the more interesting parts of the book are Inkpin’s heterodox interpretation of the works of Martin Heidegger, Maurice Merleau-Ponty, and Ludwig Wittgenstein. While other scholars have appealed to each of these authors, and various combinations of them, for the purpose of understanding language, Inkpin argues that neither one is sufficient for understanding linguistic disclosure. Instead, they are able to complement each other.

From the early Heidegger, Inkpin adopts a model of how words function and a general account of the role of language in understanding the world. He then incorporates Merleau-Ponty’s phenomenology to account for how linguistic signs function to present the world. Wittgenstein’s pragmatism aids Inkpin in understanding the versatility of language. Inkpin rightly observes that each of them “captures something of major importance about the phenomenology of language” (p. 15). While it is perhaps more obvious that Heidegger and Merleau-Ponty are incorporated within the phenomenological tradition, Wittgenstein is typically not thought of as being a phenomenologist. Inkpin is careful not to frame him as one, but only argues that Wittgenstein’s pragmatism can serve as a complement to a minimalist phenomenology (p. 200).

Given that this is a nontraditional approach to understanding these three thinkers, Inkpin spends the majority of the text arguing for how we can develop a Heideggerian framework to incorporate both Merleau-Ponty’s and Wittgenstein’s writings. While this is important for scholarship purposes, his thoroughness in resituating the three of them leaves room to further develop how his account of the experience of language is to overcome some of the major problems confronting the traditional Fregean semantics approach.

Furthermore, the more interesting parts of the book come towards the end, but, on my understanding, appear to be left as promissory notes regarding the relationship between phenomenology and cognitive science. In particular, he focuses on the embodied, embedded, enacted, and extended nature of cognition (hereafter, ‘4e’). This is a potentially important contribution given that our understanding of perception and cognition inform our understanding of how we experience the world and its artifacts, including language. Here Inkpin’s account would have benefitted from closer attention given to the likes of Gallagher and Lakoff.

In his adoption of Heidegger, Inkpin attempts to provide an account of Heidegger’s general view of the role of language in disclosing the world. In doing so, he offers substantive background to clarify Heidegger’s phenomenological account of the world. This allows the reader to develop a better understanding of how human understanding of the world arises through the use of language. It is unclear, however, that Heidegger is able to account for determinate meanings of language (p. 33) and how Heidegger is able to account for language’s ability to reveal anything about the world itself (p. 34). Inkpin attempts to overcome these difficulties by focusing on Heidegger’s notion of Articulacy (Rede) and reconciling it with the issue of understanding the extent to which, if at all, intelligent behaviors are fundamentally linguistic (p. 26). The upshot of the chapter being a clearer account of the relation between language and linguistic content.

After having clarified key issues of Heidegger’s account of language, Inkpin is then able to clarify how Heidegger’s understanding of language is a phenomenological account. In doing so, he clarifies how language is best understood as language-in-the-world. By understanding language in this way, Inkpin is able to develop a Heideggerian account of the experience of language as something being experienced in the world. This section is of particular interest to me given my own sympathies of moving away from Cartesian dualisms, but my concern is whether or not we can think of language as an artifact if we are always in the world and we come to experience much of the world through language.

Given that language is instantiated through the use of linguistic tokens, and, from the Heideggerian perspective, language discloses the world, Inkpin offers an account of how those signs are capable of disclosing the world to agents (p. 68). Inkpin argues that Heidegger’s account, at best, offers only a schematic framework since Heidegger maintains an instrumentalist about linguistic signs—that is, linguistic signs for Heidegger always stand in for something else. This gives linguistic signs both a presentational and pragmatic role, resulting in two different senses of language. Inkpin’s attempt to reconcile these two senses motivates him to consider the work of Merleau-Ponty (p. 91).

After having shown their complementarity, Inkpin is able to clarify the role of Merleau-Ponty’s account of indirect sense to better understand the representational ability of linguistic symbols. Linguistic symbols provide the means for understanding the underlying structure of presentation, offer an account of how they should be appropriately used in specific contexts (i.e. function), and their abilities to attune to the agents involved in their use (i.e., mode of intelligibility) (p. 120). While the combination of Heidegger and Merleau-Ponty assists with understanding language’s ability to present the world, Merleau-Ponty is not sufficient for understanding the pragmatic sense of language found in Heidegger. This is where Inkpin makes use of Wittgenstein.

One of the first philosophical implications that Inkpin addresses is the realism / idealism debate. Inkpin argues that the Heideggerian framework he develops illustrates that the realism and idealism debate is based on faulty ontological presuppositions. Furthermore, understanding Dasein as being-in-the-world illustrates that there is no principled gap between the way that the world appears as mediated through our projects and the way that the world is in itself (p. 235).

Inkpin’s writing is challenging and detailed. The overall book is well-organized and the argumentation is exceptionally clear. His nuanced arguments regarding the appropriate interpretation of Heidegger, Merleau-Ponty, and Wittgenstein, to illustrate how they complement one another, will be lost on those who do not have a substantive background in the authors’ earlier and later works. For this reason, the earlier parts of the book will likely be of use only to those who are engaged in scholarship. The last part of the book, however, will be of use to those who are more interested in the general relationships between cognitive science, phenomenology, linguistics, and language. Overall, the book makes an important contribution to our understanding of how the writings of historical thinkers can aid us in our understanding of how we experience language and the world.