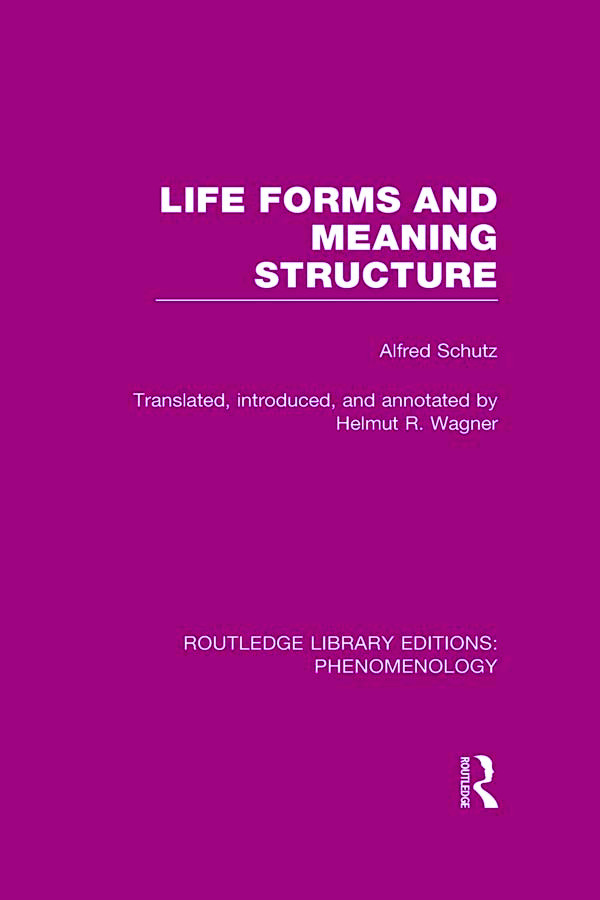 “Life Forms and Meaning Structure” is the translation of “Theorie der Lebensformen” which contains Alfred Schutz’ writings from his so-called Bergson period, namely the years between 1924 to 1928. As the Editor has explained in his introduction, the manuscripts were supposed to consist of a book; a project which was abandoned in favour of another book plan which turned out to be Schutz’ master piece, namely “Der sinnhafte Aufbau der sozialen Welt” published in 1932. What happens in between is Schutz returns to Husserl and chooses again to advance his project, “to obtain a theory of founding” (17) in respect with sociology, principally within the method of phenomenology. Schutz’ masterpiece, translated into English as “The Phenomenology of the Social World” is an outstanding work and has been well-received both by sociologists and phenomenologists. However, what makes “Life Forms and Meaning Structure” of a particular interest for a phenomenologist, besides all the other points, is to see why and how Schutz displays dissatisfaction with, up to those days available, phenomenological analyses and how Schutz would progress with an alternative (but not necessarily incompatible) path. The book is the attempt by the author to offer a basis for social sciences extracting the basic ideas from within Bergson’s philosophy. Therefore, the fact that the author has temporarily discarded phenomenological framework by turning to Bergson, and that such a project finally is relinquished, may have some implications concerning the potentialities and perhaps shortcomings of phenomenology.

The book begins with the Editor’s introduction containing helpful data about the manuscripts and the process of forming the book.  It also contains a useful explanation about the structure of the work and also some issues concerning the translation.

In the author’s introduction, he declares his discontent with the Husserlian approach for it is, according to the author, mathematical in essence. This is the attitude that Schutz also attributes to Kant and neo-Kantians. Its aim, as Schutz describes it, is “to find lawful regularities in the inanimate world” (15). Therefore, Schutz considers Husserl’s method useless as far as we are dealing with the issues belonging to the realm of the social and to animate objectivities in general.  In this respect, Schutz admires Cassirer, Siemel and Bergson for their attention to life and to the significance of non-mathematical approaches.  Schutz also mentions Weber and approves of his ideas, especially for putting “understanding” in the centre of social studies. However, this is Bergson’s approach which is particularly chosen and frequently referred to throughout the investigations to come. Schutz considers Bergson’s formulation as “a first attempt for constructing ideal types of consciousness” (18). However, there are some shortcomings in Bergson’s theory and it is incomplete, which is the fact that might justify the current project of the author. According to Schutz, Bergson’s theory is incomplete due to the following factors:

The main thesis is that “there exist, between the Kantian antithesis of sensuality and cognition or between Bergson’s duration and reason, a series of intermediate stages. Each of them is adequate to a different ’symbol sphere‘.” The relation among these symbol spheres is that of relative non-communicability. It means that “the experiences of the deeper intermediate stage, although understandable in its own characteristic symbol system, are non-transferrable into the higher sphere. “ (21) Therefore, between the pure duration and the highest conceptual consciousness there are a continuity of layers, called by Schutz, “life forms”, each of which having its own symbol system and its own manner of experiencing. “[A]ll experiences of the total I enter into every life form. It is subjected to the restriction that all experiences enter into the given life forms only as symbols.” (22) Schutz says that the number of such layers, sometimes referred to as “plans of consciousness” is not limited. Nonetheless, a definite number can be chosen in regard to the investigator’s purpose. Schutz himself has distinguished six life forms and aimed to investigate them.  These are the layers of pure duration, memory-endowed I, acting I, Thou-related I, speaking I and thinking I. However, the main body of Schutz’ work, which is included as part I in the book and it is about 90 pages in the English edition, deals mainly with the first three and remains unfinished. Three other texts which go back to the Bergson period and which are mainly concerned with  the life form of speaking I are included as part II. Part III is a text which contains only a few lines as an outline (or better combination of some outlines) for some non-accomplished project related to the current topic. Perhaps the introductory part is the richest in regard to the explanation of the thesis.

The thesis itself is very interesting and it is accompanied by some inspiring remarks. It is a pity that the project has not been completed; one would especially expect what Schutz would state about the analysis of I-You relation. In several occasions inside the text the author announces that he is going to investigate Thou experience and the like but it is never really actualized. For the most part the analyses rely on the notions of duration and memory. The discussions of the first sections of part I, in which the author intends to explicate the constitution of meaning (Sinn, and this would be better translated to” sense” if we want to attach, in some respects, the current project to the phenomenological method) on the basis of memory, are somehow repetitive and not well-structured. Of course we should notice that we have only an incomplete and unpolished draft before us. Nevertheless the sections 10 and the rest of part I offer very stimulating and original explorations of certain aspects of human life. Here the author introduces the notion of the acting-I and investigates the constitution of, among others, body, movement, space and thing.

The texts included in part III are “Meaning Structures of Language”, “Meaning Structures of Literary Art Forms” and “Meaning Structures of Drama and Opera”. These titles are chosen by the editor and the German titles for the manuscripts were, respectively, “Spracharbeit”, “Goethe: Novelle” and “Soziale Aspekte der Musik als Artform”. The first one deals with the constitution of the word and the acts of name-giving and communication. The discussion in some places turns out to be very rich and fascinating especially when the author puts forward investigations on the genesis of noun, adjective and other categories of expression on the basis of his theory of life forms. In the second chapter, the author tries to explain the characteristics of various genres of literary art on the basis of the reciprocal relation between the speaker and the listener and their different positions in each genre. Here he uses the idea of the distinction between the subjective meaning (sense) and objective one which he has introduced before. The third chapter contains a somehow specialized discussion concerning opera and drama which is interesting in its own right.

It can be said that in these texts Schutz develops various interrelated but also independently presentable ideas. The most prominent is that of life forms. The second is the importance of duration and memory. In some places Schutz states that all life forms are reducible to that of pure duration (96) as if every feature of the living ego can be derivable from duration (and memory) alone.  However, he adds the remark that the functions of life forms do not reach down to the more primitive ones (54). Whether or not this can be considered as a tension in Schutz‘ position, he himself tries to render some peculiar notions to that of time passage and memory. He announces that he will do this for the thou-experience but he does not execute it, rather he says that ‚I‘ recognizes thou also because it “can be compared to the memory images of my own past I” (127). Most importantly Schutz tries to explain meaning (sense) on the basis of the function of memory. This can be considered as the third idea forming the project. Others are those related to the constitution of spatial objectivities, word and linguistic categories, and literary genres. The main idea is very inspiring but the arguments concerning the second and third ones are not very convincing, at least when compared to the phenomenological analyses.

One of the reasons that Schutz left the book project unfinished and returned to phenomenology is that Husserl’s “Vorlesungen zur Phänomenologie des inneren Zeitbewusstseins” appeared at the same time. Accordingly, Schutz revises his analysis of inner duration and developed it using the themes introduced by Husserl. However, interestingly, one of the figures that Schutz brings in is “Theorie der Lebensformen” in order to illustrate his account of time passage which is quite similar to one of Husserl’s in the aforementioned book. It is a pity that the English translator omitted the figures. He gives some reasons for doing that, but in any case, an enthusiastic reader is somehow frustrated. This gives me the motivation to reproduce the most important one here (figure 3 of the German text). 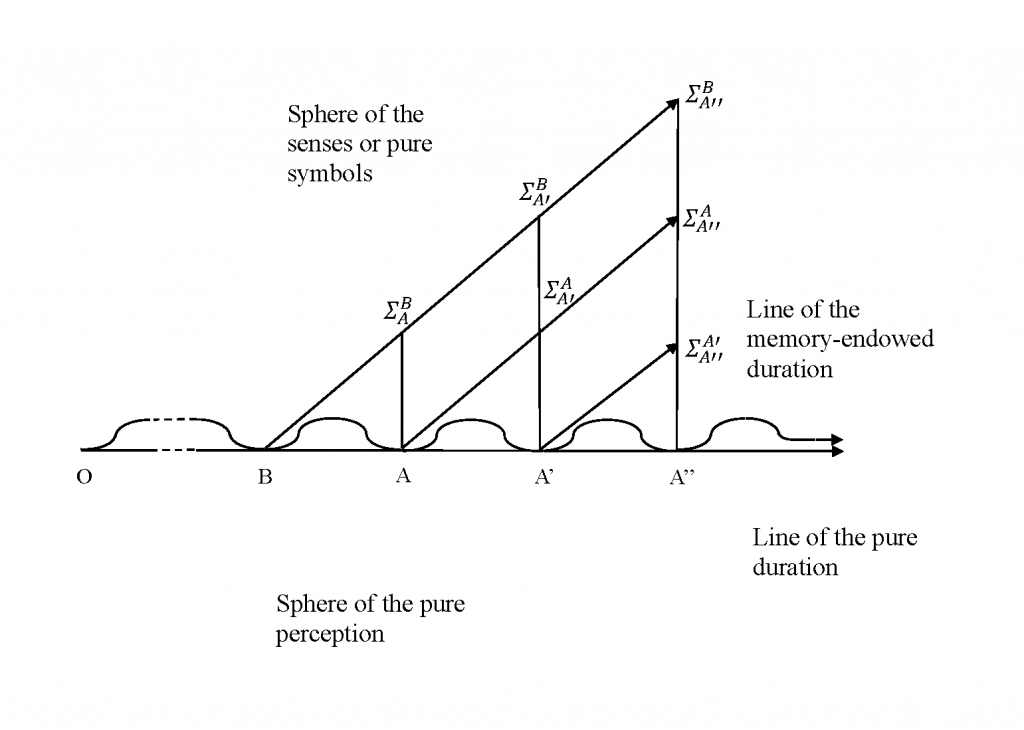 This figure resembles the figure brought in (Husserl, 1991: 98), however, there are two important differences. For Schutz the vertical lines stand for memory as if in order to make the time-awareness two dimensional, we need memory. Indeed this figure is to represent the stream of consciousness of the memory-endowed I in contrast to pure duration which had been represented as a horizontal line in figures 1 and 2 of the original text. For Husserl the vertical line stands for retentional modifications, so that the whole diagram is to represent inner time awareness. The idea of retention and also that of reproduction are adopted by Schutz in his major work. The other difference is that Schutz’ diagram includes an oscillating line, between experience and memory or between perception and sense, which is to represent the status of memory-endowed I. This idea of oscillation is a very interesting one and does not appear in Husserl’s figure, though elsewhere he speaks of oscillation in consciousness, between dull and alert cogitos.

Another notable point in comparison with Husserl’s works, this time with the works which was available at the time, concerns the analysis of sense (Sinn, which is translated as meaning in this edition). This is directly related to the theory of noema. However Schutz does not recall this theory and only once he mentions the word noema and somehow equates it with his idea of objective meaning (sense). Husserl’s theory of noema does not strictly depend on memory, as Schutz’ theory of sense in this project does. Although Husserl speaks of memory when analyzing various noematic layers, and although noema or noematic sense itself has a peculiar relation to time, it itself cannot be described as memory image, which is the delineation of sense according to Schutz. Nonetheless, in his major work, Schutz frequently refers to the concept of noema. I would like to add, en passant, that it is not unproblematic to consider noema as objective sense, if we mean by objective sense the ideal meaning. This latter can be seen as tightly related to noematic nucleus but is by no means identical with the full noema itself.

Even if one finally rejects the author’s conception of time awareness and his theory of sense, there are still a lot of inspiring ideas in the book. The theory of life forms is very attractive and the analyses offered in some passages reach a high degree of originality and insightfulness. The book enjoys a fluent translation. However, I wish it had also comprised the figures and their explanations. Also one should keep in mind that “meaning” is used as a translation for Sinn, for which “sense” would be a more precise translation, while meaning should be reserved for Bedeutung. However, this is not a defect, since the book does not belong to phenomenological literature and the translation is coherent—it employs “meaning” for Sinn and “significance” for Bedeutung throughout the book.

Husserl, Edmund. 1991. On the Phenomenology of the Consciousness of Internal Time, translated by John Bamett Brough. Kluwer Academic Publishers.