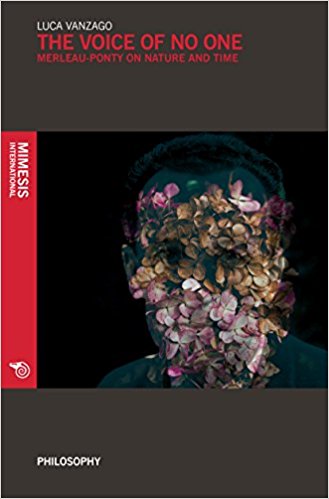 Luca Vanzago’s The Voice of No One is a thought provoking study in a newer line of Merleau-Ponty studies that seeks to build connections between the phenomenological tradition and process philosophy. Although the connections have not gone completely unobserved (cf. Hamrick 1974, 1999, and 2004), the majority of commentaries on Merleau-Ponty’s thought have completely ignored the importance of Whitehead’s philosophy to it. This situation is unfortunate for any number of reasons, but perhaps mostly due to how such a lacuna forecloses more radical understandings of the phenomenological project in general. By attempting to reinterpret the major concepts of Merleau-Ponty’s philosophy in terms of the commitments of process metaphysics, Vanzago’s book moves in the direction of closing that gap and offering a different approach within the world of Merleau-Ponty scholarship that emphasizes the importance of Merleau-Ponty’s philosophy of nature.

With that said, Vanzago takes a traditional approach to what would be a rather dramatic re-thinking of Merleau-Ponty’s work. After a helpful introduction announcing the book’s main project of drawing the phenomenological and process views closer together by focusing upon the nature of relations, the book begins with several chapters discussing methodological questions regarding the phenomenological reduction (primarily in comparison to Husserl’s method), the nature and possibility of dialectic (with reference to Hegel and Lyotard), reconsidering how relations work (the first major appearance of Whitehead in the book), and how the problem of intersubjectivity plays out in a relational context. These chapters are undertaken utilizing the classic dialogical methodology of European philosophy, and Vanzago offers exemplary studies of the philosophers with whom he engages. In these chapters, he is laying the foundations for the conceptual reconsiderations he introduces in the next several chapters before concluding the book with what this reader took to be the text’s most important contributions, namely those to the ontology of nature. This organizational strategy makes sense, but I found myself wanting the narrative to progress more rapidly toward the book’s announced themes of nature and time, which appear most substantially toward the end of the manuscript. Although Vanzago provides helpful introductory sections to each chapter describing its goals, the aforementioned studies are constructed in a rather self-contained manner. At times, their hermetic quality made it challenging to keep track of how, say, the chapter on passivity (Chapter VI), which contains Vanzago’s close reading of Merleau-Ponty’s reading of Freud’s and Husserl’s views on the passivity of consciousness, contributes to a process view of nature in which consciousness emerges from a previous intersubjective unity.

For that is the main project of the book, arguing that understanding the practice of phenomenology in terms of process metaphysics transforms the problem of intersubjectivity. The persistent criticism of phenomenology, essentially since its inception, has been that even the insistence on the “consciousness is consciousness of …” structure of intentionality and the coexistence of noesis and noema within the intentional act is insufficient to have phenomenology escape one variety of subjectivism or another. For Vanzago, this situation is an opportunity to rethink the nature of phenomenology starting from its foundations, beginning not from the perspective of consciousness, but rather from the perspective of relations. Largely this shift entails an inversion of the usual problem: “when exceeding the limits of egology, phenomenology must become able to bring into its realm that which escapes it, what Merleau-Ponty calls, with an expression coming from Schelling, the ‘barbaric principle,’ the ‘shadow’ of philosophy. In other words, phenomenology must reinvent itself in order to overcome the traditional limits of rationality” (33). A break with the traditional limits of rationality is necessary because the phenomenological thinker must look to what conditions give rise to the possibility of consciousness—the pre-objective, pre-subjective condition out of which consciousness arises—rather than remain ensconced within how phenomena appear to a conscious perceiver. The phenomenologist achieves this break dialectically, proceeding through a number of negations immanent to relational, bodily being, spontaneously creating sedimented “institutions” through which the body habitually relates to the world (44). Chapter III: Chiasms, which offers an understanding of the chiasm through concepts found in Whitehead’s thought, was a true highlight of the book. Here, Vanzago imports a “coherent relationist approach” (48) in the service of making sense of Merleau-Ponty’s attempt to construct a metaphysics that does not rely upon the philosophical tradition’s usual substance-property ontology. Here is where the heart of the process ontology is developed, in the parallelism between Merleau-Ponty’s descriptions of a “logos of the aesthetic world” in which bodily perceptual relations are primary (54) and Whitehead’s claim that every relation is an act of experience (62). Since phenomenology seeks to return to the things themselves through a return to experience, one can substitute the relational theory of experience for the more traditional phenomenological account based in the idea of intentional consciousness.

From there, Vanzago uses the idea of chiasmic relations to reinterpret Merleau-Ponty’s own ideas of bodily intentionality in two interesting and innovative ways. The first is to utilize the process view of time as a way of accounting for the emergence of particular objects from within undifferentiated Being or Nature, which seem to be roughly synonymous for Vanzago (e.g., 195). Being is understood as “the texture that is woven between in the concrete existence of men [sic] and beings” (107), the relational stuff, so to speak, out of which specific beings emerge in their particularity. These chapters, V-VIII, roughly argue that Being, when taken as a process, can account for all of the traditional features usually attributed to mind or spirit in a dualistic, substance-based metaphysics—time, “negativity,” intentionality—without resorting to the materialist “realism” that is still so philosophically popular in Anglo-American metaphysics and is currently experiencing a resurgence in so-called “new materialisms” and “object-oriented” ontologies. Doing so, however, calls for the second project: to utilize Merleau-Ponty’s key commitments to reconstruct a conception of nature that does not define humanity and nature in an oppositional or dualistic manner. Appealing to concepts such as flesh, expression, Whiteheadean events, and metaphor, Vanzago reconstructs a conception of nature that in many ways goes beyond the one Merleau-Ponty develops explicitly in his incomplete later works. Chapter IX: Processes and Events is a highlight in this regard and serves as a complement to the aforementioned Chiasms chapter for those interested in an in-depth analysis of Merleau-Ponty’s relationship to Whitehead.

This latter goal, of course, has been the goal of any number of environmental and philosophies in the critical tradition for decades, a fact Vanzago acknowledges (187). Unfortunately, there is no attempt to engage with those thinkers or traditions and a major shortcoming of Vanzago’s book is the nearly complete absence of consideration of either philosophers outside the canon of major 20th Century (male) European thinkers or the wide array of commentaries that already address these concerns. On the first point, particularly noteworthy is the omission of the work of Val Plumwood, whose Feminism and the Mastery of Nature (1993) argued for a non-dualistic conception of nature in a way that accounts for both continuity between humanity and the rest of nature and the distinctiveness of the various forms of life and inanimate beings that comprise nature. Even within the canon of 20th century European thought, however, there are omissions. It is difficult to see how one could write a book on this specific subject without at least acknowledging Luce Irigaray’s (1993) criticism of Merleau-Ponty on precisely the point on which Vanzago focuses: the notion that Being is unitary and difference is something that needs to be accounted for rather than being a foundational element of being. Although getting bogged down in the literature can have a stultifying effect when one is attempting to articulate a new theoretical perspective, it is also true that entering into dialogue with those who are working with similar if not identical questions might help to refine one’s own work. English language scholars have been discussing these issues for some time, with commentaries such as Aarø (2010), Bannon (2011; 2014), Hamrick and Van Der Veken (2011), and Toadvine (2009)—just to name a selection from within the last decade—arguing for similar perspective to Vanzago’s. Rather than, in some cases, treading on familiar ground, I would have like Vanzago to further develop his innovative thesis further with reference to extant interpretations.

In some ways, this book is torn between two audiences. On the one hand there is the world of Merleau-Ponty scholarship where the organization and methodological choices make the most sense, but there is also very little in the way of engagement with other scholars in that field. On the other hand there is the broader world of philosophy, for whom there is much of interest in the book. Here, the ideas would be better presented by organizing around specific questions or problems rather than concepts. Doing so might appeal to the broader audiences alluded to in the book itself: ecological thinkers, philosophers of science and scholars within science studies interested in the ontology of scientific practice, phenomenologists who work on figures other than Merleau-Ponty, etc.

Despite these reservations, however, The Voice of No One is a substantial addition to the literature and deserves a reading from Merleau-Ponty scholars due to its careful analysis of the texts of both Merleau-Ponty and many of his major interlocutors. The text presents a well-argued case for its central thesis and presents strong evidence that the more established interpretations of Merleau-Ponty’s philosophy, particularly the later work, are in need of revision in order to accommodate Merleau-Ponty’s engagement with process thought in general and with Whitehead in specific.

–. 2004. “Whitehead and Merleau-Ponty: Healing the Bifurcation of Nature.” In Whitehead’s Philosophy: Points of Connection, edited by Janusz A. Polanowski and Donald W. Sherburne, 127-142. Albany: State University of New York Press.

Irigaray, Luce. “The Invisible of the Flesh: A Reading of Merleau-Ponty, The Visible and the Invisible, ‘The Intertwining—The Chiasm.’” In An Ethics of Sexual Difference, 151–84. Translated by Carolyn Burke and Gillian C. Gill. Ithaca: Cornell University Press, 1993.