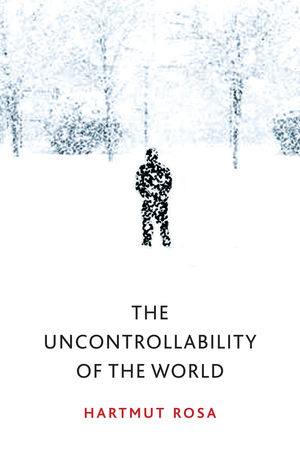 Reviewed by: Andrei-Valentin Bacrău (former graduate researcher at the University of Zurich)

Rosa’s “Uncontrollability of the World” is an accessible read, regardless of philosophical background and training. The minimal use of jargon and social analysis remain engaging through the text, while providing a fresh outlook towards what it means to be an individual in the 21st century, surrounded by constant notions of “progress”, which we do not sufficiently examine towards our well-being. As consumers of goods, we often engage with financially unreliable planning and aspirations. Simultaneously, even the notion and strategy of being a good parent is undergoing significant transitions (64-65). The growing concern of parents has changed from trying to offer children what is best, to at least ensuring that they are not falling behind in terms of financial security and professional success.

The initial German for “uncotrollability” is translated from “unverfügbar”. Rosa clearly acknowledges the peculiarities and minimal use in the German language of such concept. He begins the book with a nomological investigation about “unverfügbar”. Although the translation of “unpredictability” has also been considered, Rosa eventually defers to “uncontrollability”, for thematic reasons:

This is exactly what this book is about: modernity’s incessant desire to make the world engineerable, predictable, available, accessible, disposable (i.e. verfügbar) in all its aspects (viii).

Additionally, Rosa is also examining the extent to which we enjoy unpredictability and uncontrollability as well. If we look at sports or board games, it seems that part of the reason why we continuously practice and engage in these activities, is because we do not know who the winner is eventually going to be (3). The randomness involved in all combinatorial possibilities, strategies and moves by a team or individuals within a game, are unpredictable: and that is what instigates our curiosity and desire for continuous re-construction of such playful events.

Although the book is strictly discussing our modern age, these notions of predictability, engineering and disposability have been within the minds of Western Europeans since the Scientific and Industrial Revolutions, respectively. The constant desire to manipulate nature, events and our social ecosystem has resulted in a change of how our families, work space and countries interact. Rosa does not specifically address the aforementioned events and their relationship to modernity. However, he does mention that our resultant modern ecosystem has been emerging for the past three centuries, due to our human nature’s disposition to expand relentlessly (8). Rosa’s transition into his central arguments is the position of a realist in political science: regardless of boundaries, walls and other political aspirations, the international world remains anarchic, uncontrollable and unpredictable (20).

Prior to explaining the five main theses of the book, there is a secondary, auxillary concept evoked almost as often as uncontrollability itself. The notoin of resonance plays a significant role in showing the instrumental limits of control, as well as how we socially cope with the uncontrollable aspects of our experiences in the world. “Resonance” itself does uptake multiple meanings, and in some points it could be as easily substituted with the use of “uncontrollability”. However, it seems that the primary role of “resonance” is to evidentiate what makes our experiences “uncontrollable”, and which features of these can become, eventually, within our reach and hence “semi-controllable” (44). Resonance is not as elusive as uncontrollability (4), so it rather behaves as some sort of intersubjective dynamic that enhances our experience of the world.

Gradually, the concept of resonance also uptakes an existentialist baggage. By evoking Merleau-Ponty (31), we as subjects mainly respond and react to experiences, others and events. Rosa further extends this responsiveness as an outcome of resonance. Resonance is a necessary precondition of experience, for an individual to have the reactionary capacity Merleau-Ponty is describing. Consequently, Rosa frames the notion of resonance as a “mode of relation”, which displays the following four features (32-36):

There are segments, as exemplified by the fourth denotation, where it can be unclear whether or not Rosa evokes uncontrollability as a denotation of resonance or not. It seems that in most uses, “uncontrollability” is unexplainable without some entailment relationship to “resonance”. Both of these concepts, however interchangeable they might be through Rosa’s book, definitely attempt to guide us through the same social phenomena. The more we try to engage in meaningful discussions about predictions, control and the satisfaction of our desires (however these dispositions themselves might in turn be controlled by the invisible hand of the market), our experiences as consumers and beings in the world are not fully satisfied- simply said, unhappy. To further elucidate the relationship between “uncontrollability”, “resonance” and our human experience, Rosa advances five primary arguments through the book:

In this passage we can notice additional clarification between the two main concepts of the book. We have a human disposition to react towards what we are affected by, a sensorial experience which is mediated by resonance. Rosa argues that both other subjects, as well as objects (in themselves) have such embedded property of “somehow” projecting “resonance” towards us. Although it is not quite clear how or why other features of the world beyond us have this “resonance” to them, the conclusive remarks of the unit is that there is some sort of relationship towards an “inherent uncontrollability” both in ourselves, as well as in the external world. This thesis becomes slightly difficult to really grasp, especially since the verbatim of the first assertion is that there is no contradiction between the uncontrollability of resonance and the controllability of things. We may uncontrollably become attracted to a wonderful piece of music, wich we eventually resonate to. Afterwards, we can play the song whenever we desire, which does seem to be in our control. Hopefully this elucidates what Rosa was trying to convey with the first thesis.

Once we obtain some sense of controllability over what we resonate with, it becomes “semicontrollable”. This is quite a fascinating approach for balancing between the things that are and are not within our control. Therefore, the external world with subjects, objects and events, do possess this feature of resonating with us. Once we correctly internalize this experience and resonate with it, both the external manifestations, as well as resonance itself, becomes semicontrollable. According to Rosa, there are conditions for response from our own subjective side via the sensorial mediation of resonance, and once we have gained some mastery over these phenomena, resonance transforms its features from uncontrollable to semicontrollable. This outcome would also suggest that there is some feature of the external world and others, which will remain uncontrollable, despite any potential conditions of transforming resonance into something semicontrollable.

§3 Resonance demands a form of uncontrollability that “speaks,” that is more than just contingency (48).

Now Rosa is guiding us through the aspects of resonance which remain uncontrollable, despite any transformative conditions. Rosa himself admits this is the most difficult one to demonstrate. He further elaborates on some feeling that we establish towards a song or natural sight (49). The terms chose to describe such relationship, however unexplainable, include “harmony and beauty”. By deferring to Erich Fromm, during the contact phase with natural beauty, for example, the modes of existence shift from “being” to “having” (51).

§4 An attitude aimed at taking hold of a segment of world, mastering it, and making it controllable is incompatible with an orientation toward resonance. Such an attitude destroys any experience of resonance by paralyzing its intrinsic dynamism (52).

Although §2 was emphasizing that eventually, we can obtain some mastery over resonance which leads to a semicontrollable relationship to the external world, §4 has a normative reading to it. Firstly, Rosa introduces a mechanism through which this intrinsic dynamism happens: subjective dimension, object dimension and process dimension (53). This was surely an interest addition to his work, and it would have been helpful to understand what he had in mind with the dynamics of resonance, controllability and uncontrollability via this particular explanation. Rosa does guide us through some fundamentals. The subject dimension is our willingness (and perhaps, openness) to be touched or changed in unpredictable ways. This argument could have been further explored to understand what Rosa thought about the limits of our self-control and autonomy, in relationship to the extent to which we ourselves can transform the external uncontrollable circumstances into semicontrollable ones. At the same time, §4 suggests that once we do obtain that state of semicontrollability, resonance changes its functional applications and interaction with us, thus overall, the entire dynamic of mind and world experiences something else.

Additionally, resonance here is argued as “vulnerability and a willingness to make ourselves vulnerable” (53). We must exercise our autonomy in such a way that we allow ourselves to be opened to vulnerabilities and unpredictable, uncontrollable changes from the external world. The object process seems quite difficult to understand, though hopefully the readers see it as an invitation to further explore Rosa’s work for themselves:

On the object side, uncontrollability means that what we encounter must resist us in at least one of the four dimensions of calculation and control. There must be at least one “obstinate remainder” that has something to say to us, that is meaningful to us in the sense of a strong evaluation (53).

What makes resonance dynamic, is that we cannot control it either with our beliefs or desires. Wanting to be happy on Christmas, or excited for a first date, are not attitudes within our reach or control (56). Now we turn to the fifth thesis:

§5 Resonance requires a world that can be reached, not one that can be limitlessly controlled. The confusion between reachability and controllability lies at the root of the muting of the world in modernity (58).

For the rest of the book, this fifth thesis becomes the most significant one. Rosa argues that Hermann Dueser initially coined the term “Unverfügbarkeit” (uncontrollability), by looking at Kierkegaard’s existential philosophy, while attempting to show an opposition to humanity’s complete technological takeover (58). The book continues to be filled with numerous sociological examples about the implications for resonance theory in our daily activities, work, family lives, and religion. The readers should also be wary that in the religious context, Rosa uses “uncontrollability” and “inaccessibility” interchangeably. Whereas inaccessibility can denote the same kind of “unreachability” or “unavailability” that “uncontrollability” does, “unreachability” could also denote that it is not resonant at all, since it is completly beyond our reach or comprehension. Two other significant examples are about modern medical and political practices. Our methodology to any disease is to control it, subdue it and overcome it as quickly as possible (76). In the political ecosystem, however, voters become quite surprised when policies do not go their way. We expect our institutions to control and correctly predict the outcome of political events, in such a way that there are not any unwanted surprises and everyone achieves their respective agenda (91).

The rest of the book is filled with daily, relatable examples of how these dynamics of resonance and uncontrollability affect aspects of our lives. I would highly suggest this book to anyone that wants to further understand some difficult predicaments about modernity, whether at the individual or collective level. The smoothness and approachable language of the text is quite clear and engaging.