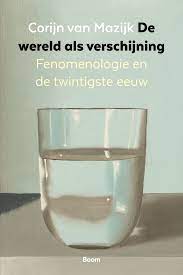 Dr. Corijn van Mazijk is an assistant professor at the Rijksuniversiteit Groningen, the Netherlands, who specializes in Kant and post-Kantian philosophy, particularly phenomenology. De Wereld als Verschijning: Fenomenologie en de Twintigste Eeuw (The World as Appearance: Phenomenology and the Twentieth Century, all translations from the Dutch are my own) is his second book, following a monograph on the nature of reality, perception and the relation between the two, in the work of Kant, Husserl and McDowell.[1]

De Wereld als Verschijning is a step back from the highly specialized research conducted in the earlier publication. Van Mazijk sets out to provide an introduction into phenomenology that is “as easily accessible as possible” (32). And that is exactly what he delivers. The book comprises five chapters and each chapter treats one of the four most influential phenomenologists of the 20th century; Husserl, Heidegger, Sartre and Merleau-Ponty, respectively. The final chapter discusses six lesser known phenomenologists, including Edith Stein and Emmanuel Levinas.

Each chapter follows an identical structure. It opens with a short column detailing the main themes of this particular philosopher’s thought, as well as his or her influence on the development of the phenomenological tradition. This is followed by a few pages of biographical information, detailing the life of the thinker and the cultural-intellectual climate of the time, and how this influenced the work he or she went on to produce. With this setting-the-stage out of the way, the main part of each chapter is dedicated to a discussion of the philosophical substance itself. Van Mazijk emphasizes that although the book is intended to introduce phenomenology, the subject matter by itself is by no means simple, and so the main objective is to expound the ideas as clearly as possible, where needed aided by illustrations. The chapters then conclude with an overview of the main ideas of each thinker, complemented by a short list of important concepts and their definitions.

The work of each thinker is discussed in largely chronological order. For example, the first chapter, on Husserl, starts out with a discussion of the Logische Untersuchungen (1901) and ends with Die Krisis der Europäischen Wissenschaften und die Transcendentale Phänomenologie (1936). Of the five, this chapter is the longest. This is not surprising, considering the amount of work Husserl produced and his importance as the founder of the phenomenological tradition. As such, this chapter serves not only as an introduction to Husserl, but to the themes and philosophical considerations that continue to define phenomenology more broadly. It starts out, for instance, with Husserl’s critique of psychologism and naturalism, and the aim of returning to the description of things as they are given to consciousness, guaranteeing the clarity and absolute certainty of the outcome of his investigations. Van Mazijk then introduces the reader to Husserl’s work on intentionality, the natural attitude, the phenomenological reduction and the epoche. Then follows a more in-depth explanation of eidetic variation and the difference between constitutive and genetic phenomenology, the latter marking a shift in focus from Husserl’s earlier to his later work. The chapter concludes with a discussion of Husserl’s concept of ‘horizons’ and his analysis of time. By the end of these 36 dense pages, the reader is acquainted with many concepts and themes essential to understanding the other thinkers, although it is likely that those novel to phenomenology will have to return to this chapter for clarifications later on.

As the previous one, the chapter on Heidegger is divided between the early and later works. The priority is given, understandably, to the earlier work, Sein und Zeit (1927) in particular. Van Mazijk spends some time establishing the relationship between Husserl and Heidegger, and consequently the personal and intellectual rift between the two. He emphasizes Heidegger’s deviation from Husserl, especially where it concerns their respective epistemological positions by highlighting Heidegger’s recognition of human finitude and “the insignificance of every human attempt at knowledge” (p. 72). Simultaneously, he shows how Heidegger employs a kind of phenomenological reduction in carrying out his existential analytic of Dasein to uncover the ‘meaning of Being’. The main part of this chapter is dedicated to examining the results of this analysis, including the ontological difference between beings and in general, being-in-the world as human existence, care, the distinction between Vorhanden and Zuhanden through the classic example of the hammer, and the different modes of human existence in fallen-ness and authentic being. The chapter concludes by referring to Heidegger’s later works, of which only The Question Concerning Technology is discussed somewhat extensively.

The third chapter, on Sartre, is almost a third shorter than the preceding two and by far the most critical of the author discussed. In the introduction Van Mazijk makes it clear that, rather than a rigorous philosophical teaching, Sartre’s existentialism was more of a cultural movement, “comparable to the American beat generation” (109). Sartre, he argues, uses Husserl and Heidegger’s phenomenology primarily to ground his theory of the radical freedom of human beings. According to Sartre’s analyses, expounded in his main works Le Transcendence de l’Ego (1936) and L’Être et le Néant (1943), consciousness is essentially nothingness, an apersonal, transparent process without fixed properties. It is this essential nothingness, being-for-itself, that constitutes the freedom against the being-in-itself, the massive presence of the outside world. Thinking one is ‘something’ or a definite ‘someone’ is living in bad faith, a denial of the true, free essence of human life; hence Sartre’s famous proclamation that “existence precedes essence”. Van Mazijks main critique of Sartre’s brand of phenomenology is that it is flawed and inconsistent. It is flawed, since it denies the limiting constraints put on freedom by concrete reality. It is inconsistent, on the other hand, because Sartre modifies his theory on multiple occasions to undercut objections raised against him, or to avoid unwanted conclusions that seem to follow from his premises. For example, he rejects the possibility of radical egoism by introducing a kind of Kantian deontology in his lecture Existentialism is a Humanism, without much ground for these kind of ethical constraints on human freedom present in his earlier works. All in all, it seems Van Mazijk includes Sartre in the book more because of his historical influence in popularising phenomenology in Europe mid 20th century, rather than his philosophical accomplishments in their own right.

The fourth chapter discusses the work of Merleau-Ponty. The shortest chapter of the book limits itself to discussing La Structure du Comportement (1942) and Phénoménologie de la Perception (1945). Van Mazijk stresses Merleau-Ponty’s achievements in his analysis of perception as the fundamental way in which subject and object, or consciousness and world, interact. For each work, he shows how Merleau-Ponty’s dialectical style of doing philosophy results in a new understanding of this interaction. He shows how Merleau-Ponty uses insights from Gestalt-psychology to show how the intellectualist and physiologist paradigms of human behaviour are both lacking in their own right when it comes to describing and explaining behaviour, while his own position ambiguously oscillates between these subjectivist and objectivist poles, resisting a reductive interpretation. Similarly, in Phénoménologie de la Perception Merleau-Ponty shows how both empiricism and intellectualism remain stuck in the natural attitude towards the world, whereas perception as the portal to this world cannot itself be understood in terms of it. His own phenomenological analysis, combined with insights from empirical research, again paints a more holistic and ambiguous picture of the relation between man and world, in which the living body is the locus of this interaction. Van Mazijk emphasises that Merleau-Ponty’s phenomenology is much closer to Heidegger and Husserl than it is to Sartre – although the deviations from Husserl are significant, including the integration of empirical research in his philosophical works, leading to a more interdisciplinary phenomenology.

The fifth and final chapter of De Wereld als Verschijning explores the work of six lesser known phenomenologists in brief. These are, in order, Max Scheler, Edith Stein, Eugen Fink, Alfred Schutz, Emmanuel Levinas and Jan Patočka. Here, too, a brief biographical introduction is followed by a discussion of their work. Since only a few pages are dedicated to each thinker, their treatment is condensed to a defining theme. For Scheler, this is love; for Stein, empathy; for Fink, phenomenology itself and the possibility of philosophy in general; for Schutz, philosophy of the social world and the foundations of sociology; for Levinas, the Other; and for Jan Patočka, the care for the soul. This chapter is a nice addition to an introduction to phenomenology, since it shows the influence and scope of phenomenological research. The choice of authors seems somewhat arbitrary, though; certainly, other writers in the phenomenological tradition could have been considered, such as Frantz Fanon, Ludwig Binswanger, Luce Irigaray or Iris Marion Young. Their influence today is certainly no less than Patočka or Schutz, and the inclusion of especially Young and Fanon would have added some diversity. They opened the door to what is now called Critical Phenomenology, and have been instrumental in pointing out how the supposedly ‘neutral’ consciousness of classical phenomenologists obscures latent presuppositions on what it is to be human. It is also notable that Simone the Beauvoir receives no more than a passing mention in the chapter on Sartre, while she is from a philosophical perspective undoubtedly as influential as her life-partner.

The book starts out with the question ‘what is phenomenology?’, and by the end the reader has a good idea of what Husserl, Heidegger, Sartre and Merleau-Ponty thought on this matter. However, Van Mazijk’s own view on the matter is not discussed in detail. In the conclusion, he briefly discusses the modern, specialized applications of phenomenology in different branches of science, such as psychiatry and artificial intelligence. It appears he laments this development and prefers the ‘grander’, more ambitious transcendental and existential projects of the past. He writes: “Only the future can tell whether the phenomenology of the 20th century had maybe more to offer than a reservoir of ideas for scientific application”, and it is clear that he certainly thinks so, but how exactly remains obscure. Throughout the book, he mentions these modern applications of phenomenology, but never elaborates in detail. This is a missed opportunity, since it could have emphasized the importance and relevance of the tradition, and potentially inspire those readers not strictly interested in abstract philosophy.

All in all, Van Mazijk provides a detailed and supremely readable introduction into phenomenology, which will undoubtedly be of great value to those interested in learning about the tradition and its main figures, or students looking for a good overview. De Wereld als Verschijning is the first book of its kind published in Dutch by a Dutch author in several decades, and it is a testament of the knowledge, passion and dedication the author has for his field of expertise.

[1] van Mazijk, C. 2020. Perception and Reality in Kant, Husserl, and McDowell. New York, NY: Routledge.  For a review of this book in this journal: http://reviews.ophen.org/2020/08/23/perception-and-reality-in-kant-husserl-and-mcdowell/.