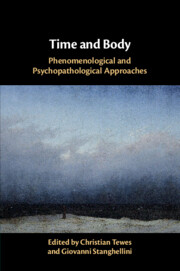 An introductory essay by Tewes and Stanghellini (2021) and a preliminary paper by Fuchs (2021)  ̶  to whose enduring work the book is also dedicated  ̶ open this interdisciplinary collection. Fuchs’s seminal influence over the subsequent researches presented in the volume is thus recognized right from the start. His own hypothesis is that a desynchronization of the intersubjective time experience causing a loss of bodily resonance (2013, 99) lies at the heart of several psychopathologies, such as autism, schizophrenia, depression, post-traumatic stress disorder, and anorexia nervosa (2021). The remaining essays are grouped by pathologies into 4 sections: I. Body and Time (Legrand, 2021; Stanghellini, 2021; Depraz, 2021; Tschacher, 2021); II. Grief and Anxiety (Køster, 2021; Tanaka, 2021); III. Borderline Personality and Eating Disorders (Ratcliffe & Bortolan, 2021; Schmidt, 2021; Rodemeyer, 2021; Doerr-Zegers & Pelegrina-Cetran, 2021); IV. Depression, Schizophrenia and Dementia (Lenzo & Gallagher, 2021; Froese & Krueger, 2021; Van Duppen & Sienaert, 2021; Tewes, 2021). Interesting commentaries follow each article, discussing the item at issue. The book shows how insights and methodologies from phenomenology and enactivism can be applied in clinics (p. 5), especially in suggesting alternative treatments: Dance therapy or music therapy, for example, can induce a re-synchronization, restoring co-temporality in the therapeutic relationship.

Since Gibson’s (1979) and Varela’s (1991) seminal works on the ecological approach to mind and consciousness, embodiment and enactivism have gained an increased following in the cultural (intersubjective) domain too (Durt, Fuchs & Tewes, 2017; Etzelmüller & Tewes, 2016). What is still missing, however, is an investigation into the interconnection between temporality, embodiment and intersubjectivity (Fuchs, 2013, 2017, 2018) and its significance for psychopathology (Fuchs, 2021): This is the novel contribution the book aims to provide. The main goals of the volume include increasing understanding of the intertwinement of time and bodily experience as well as in the development of an embodied-based phenomenological psychopathology. Some fundamental phenomenological insights can enlighten the several psychopathologies analyzed: The distinction (and shift) between the body as subject / as object (Merleau-Ponty, 1945); time, as an implicit/explicit feature (Husserl, 1952); intersubjectivity, and the related self/other demarcation (as disrupted in pathologies (Sacks, 1987; Sass, 2003; Tsakiris, Prabhu & Haggard, 2006)) as well as the debates about ‘minimal self’ (Lane, 2020; Zahavi, 2017; Nelson, Parnas & Sass, 2014).

With this in mind, another useful way of carving up the conceptual space of the book is by a further thematic (phenomenological) grouping of the several contributions to the volume. Each essay is concerned with the interrelation between temporality and the embodied/embedded mind in psychopathology. However, it is also possible to recognize a particular focus on some of these fundamental phenomenological insights.

Most of the essays are committed to the grounding role of the body. Section I includes papers focussed on the shift from the subject-body [Leib] to the object-body [Körper] in psychopathology. Stanghellini (2021) points out this shift to an ‘objectified body’ in schizophrenia. The Leib profile, meanwhile, is recognized as related to the borderline disorder  ̶  especially under the outlined profile of the ‘sheer flesh’ (Merleau-Ponty, 1945, 1968; Henry, 1965). Moreover, Stanghellini identifies the ‘body-for-others’  ̶  i.e., the body under the others’ gaze (Sartre, 1956)  ̶  as being particularly impaired in eating disorders. Beyond the traditional Körper/Leib distinction, he also works out multiple layers of Leib (the ‘lived’ body) as distinct from the ‘living’ body: A crucial difference (but also an intimate relationship between living/lived body), that is further recognizable between just ‘living’ and ‘feeling’ of being alive, Leben and Erleben (Fingerhut & Marienberg – Eds., 2012; Fuchs, 2012; Engelen, 2014, 2012; Barile, forthcoming). In the following sections of the volume, Tanaka (2021) also investigates the role of the body-as-a-object ‘for others’, but in the context of social anxiety. Doerr-Zegers and Pelegrina-Cetran (2021) are concerned with the shift from the body-subject and the body-object in anorexia, as related to implicit/explicit temporality. Van Duppen and Sienaert (2021) examine catatonia  ̶ a psychopathology that is underinvestigated  ̶  particularly body freezing, as ‘objectifying’ the body. Finally, Tewes’s (2021) contribution on dementia offers an embodied approach to selfhood and personal identity over time. Specifically, he assigns a constitutive role of bodily continuity to personhood, in line with other kinds of approaches also in opposition to the brain- and cognitive-centred mainstream view (Damasio, 2021, 2010; Barile, 2016).

A minor part of the essays collected in the volume focuses on the other grounding phenomenological insights of the book: Time (as implicit/explicit temporality), and intersubjectivity. Tschacher (2021) emphasizes the role of time and body in psychotherapy, offering a quantitative approach based on dynamical systems theory. Adopting a microphenomenological methodology, Depraz (2021) instead investigates psychosomatic diseases as related to chronic time. On his side, Rodemeyer (2021) deals with temporality and body involvement in gendered experiences in the context of eating disorders. Lenzo and Gallagher (2021) underline the role of intrinsic temporality and its disruption in depression, schizophrenia and dementia.

As concerning intersubjectivity, Tewes and Stanghellini’s (2021) and Fuchs’s opening articles (2021) on embodiment, temporality and intersubjectivity in phenomenology and psychopathology are seminal contributions. Among the others, Legrand (2021) is the most committed to the very intertwinement of intersubjectivity, time and body in psychopathology. From a phenomenological (Merleau-Ponty, 1945) and a psychoanalytical perspective (Lacan, 1981), she focuses on the fundamental role of body and time (synchronization) for clinics. As concerning body, ‘otherness’ and the self/other demarcation, Legrand argues against Nancy (2000) for the existence of ‘fluctuating’ boundaries between bodies, recognized as at the basis of both singularity and alterity. Also committed to the ‘being-with’ feature, Køster (2021) provides an existential-phenomenological analysis of the feeling of ‘emptiness’. Ratcliffe and Bortolan (2021) deal with borderline disorder (BDP) as related to emotion dysregulation and unstable interpersonal relationships. On his side, Schmidt (2021) offers a holistic account and a multifactor description of BDP. He focusses on self-experience (which all other factors amount to) rather than on interpersonal relationships only. Froese and Krueger (2021) also concentrate their attention on intersubjectivity and the disturbed self/other demarcation, particularly in schizophrenia.

In sum, the volume turns out to be an interdisciplinary collection of essays accomplishing the goals «to sharpen and deepen an understanding of the intertwinement of time and bodily experience» and «to contribute to the further development of an embodied-based phenomenological psychopathology» (p. 4). Furthermore, the book offers some important contributions (particularly, Tewes & Stanghellini, 2021; Fuchs, 2021; Legrand, 2021; Køster, 2021; Ratcliffe & Bortolan, 2021; Schmidt, 2021; Froese & Krueger, 2021) to enlightening the interconnection between temporality, embodiment and intersubjectivity (Fuchs, 2013b, 2017, 2018b) and its significance for psychopathology (Fuchs, 2021). This aspect is recognized as «still missing» in embodiment and enactivist researches in the introductory paper by Fuchs (p. 12): Some steps on this direction can be traced back to Fuchs’s seminal work (2013b, 2017, 2018b) as well as a number of others (Durt, Fuchs & Tewes, 2017; Etzelmüller & Tewes, 2016; De Jaegher & Di Paolo, 2007; Koole & Tschacher, 2016). Disclosing the interconnection of time, body and intersubjectivity in psychopathologies constitutes a key ‘inspiration’ of the volume. However, the innovative approach to the clinical practice, considered in the light of phenomenology and embodiment research methodologies and insights, is where this volume’s main contribution lies.

The author confirms being the sole contributor of this work and has approved it for publication.

Fuchs, T. (2018a). Ecology of the brain: The phenomenology and biology of the embodied mind. Oxford University Press: Oxford (UK).

Conflict of Interest Statement: The author declares that the research was conducted in the absence of any commercial or financial relationships that could be construed as a potential conflict of interest.