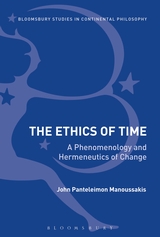 The Ethics of Time: A Phenomenology and Hermeneutics of Change
Bloomsbury Studies in Continental Philosophy
John Panteleimon Manoussakis
Bloomsbury
2017
Hardback $102.60

Augustine’s Confessions is not a book. It has no title in the titular or thematic sense. It is simply what it is: confessions. What more could it be? A collection of thirteen small books? An evangelical memoir? A developmental prayer diary? A pre-modern work of speculative non-fiction? These are tedious questions. No one cares whether the Confessions is a book or not. Augustine does not seem to care. This reveals that, as with most things taken for granted, we do not know what books are when we address or review them as books. So what is the intellectual genre of Augustine’s Confessions? Jean-Luc Marion has remarked that the Patristic period of theological thought would have understood itself as philosophy, not theology, and thus scholastic theology begins after the end of theology.[i]

It is helpful to keep these opening remarks in mind if one seeks an encounter with John Panteleimon Manoussakis in The Ethics of Time. It is a book that cannot be read, even if one tries to read like a cow through rumination, as Nietzsche demands in his preface to Genealogy of Morals.[ii] The Ethics of Time must be encountered. Reading is certainly an encounter of a certain kind, but the kind of encounter this book demands goes much further than any other recent philosophical book I have read. This may be because our present mode of reading is detached from the type of reading we find in Ezekiel, where the prophet is fed a holy scroll, and I suspect that my suggested encounter beyond reading is in many respects nothing but a truer form of reading. Nonetheless, there is a distinction to be drawn between a literary encounter and the phenomenological encounter that Manoussakis’ book investigates (through desire) and demands (through ethics). (This distinction is carefully attended to by Manoussakis in the theological realities of the beginning, logos, and flesh throughout the book, but especially in chapter 7, “The Time of the Body.”)

One might object that presenting ideas in a book is not the same thing as demanding them as the terms for a specific kind of encounter, but this takes us back to the reason why I insist that this book must be encountered as opposed to being read, however unsatisfying that opposition may be for philosophical logic-chopping (to use the Jamesian expression). More important for my purposes here, if I take the erotic terms for this encounter seriously, then this review must struggle and fail to break free from Manoussakis in the course of re-viewing his book. Perhaps he will break my hip as I beg him for a blessing. We will have to see, again and again. That is what it means to re-view something.

One might consider The Ethics of Time to be an eclectic book in light of its variety of sources. This would be a mistake. It is true that Manoussakis works from Ancient Greece and the Early Church to contemporary phenomenology and cinema. However, this seems to be more of a personal reflection of Manoussakis—more reasons for my insistence on an erotic encounter—than evidence of technical or systematic pyrotechnics. It may be hard to ignore the sheer volume of philological, theological, psychoanalytic, exegetical, and phenomenological resources put to use in this volume, touching equally upon ancient scriptures as recent films, but this quantified sense of eclecticism misses more than it hits. It mainly misses the book’s constant refrain: Augustine’s Confessions. Unlike Heidegger, who despite his occasional explicit turns to Augustine is in constant dialogue with him throughout the entirety of Being and Time, Manoussakis never pretends to stray from him. In other words, Manoussakis repeatedly draws upon the only other book I can think of that can to the same degree be misunderstood through its voluminous variety. Perhaps he is being vain in tempting this comparison? Or maybe he is too humble to admit it?

Beyond the constant presence of Augustine’s Confessions in the book as a musing refrain, Manoussakis just as constantly invents original interpretations of the classic text. Before I mention any of these insights, and immediately attract the philosopher’s skepticism, I would like to remark on how Manoussakis phrases his inventions. This is not a note on method in the sense of construction or composition; it is more a note on voice and style. If one would permit the expression, I would say this is a brief note on the musicality the book. For me this was the most philosophically challenging aspect of the book but also the most delightful.

“What we call life is a series of intervals from sleep to sleep.”[v] This line comes within a discussion of boredom and just before a deeper look into the radical implications of having “nothing to do.” Even without puzzling together the meaning of the line within its proper textual context, it serves as an example of the barrage of poetic impulses that assault the Academician and exhort the Artist. They often come in swift lines and fine-tuned associations. The urge to call them hasty is the desire to read, the desire to take Manoussakis at his word is the urge to encounter.

All of this is to say that there is an active wit in the book that is sharp and playful enough to verge on being unserious. But these risky moments of “Will and Grace”—anyone who misses this is too dull to understand this book—are contained with a form and structure where metaphors bear the mythopoetic weight of the book’s absent thesis. For instance, Manoussakis titles his Chapter 5, “After Evil,” hinting at the ethics of time where we move beyond evil without ventured beyond it entirely. This chapter features a stunningly clear and original rendition of Augustine’s account of the privation of evil—where evil is not simply metaphysically privitive of the good, but where sin becomes the ethical condition for the possibility of freedom—and reveals a powerful account of the book’s major preoccupations. The account does not so much make this preoccupation clear so much as it makes it serious enough, to the one willing to accept the terms of encounter, to see with eyes of faith.

For Manoussakis, the difference that lies in the interval between evil and goodness is only time. This difference is presented by Manoussakis through the two gardens of Eden and Gethsemane, which allude to his most steady companions, the Confessions and Christian scripture. These two gardens hold within them the capacity to re-present an ethics that is opposed to stasis; in other words, an ethics of time. This rendition of an ethics of time is central to the book’s unmet desire to address itself as a book titled The Ethics of Time.

A key feature of the above analysis is important to understand on its own terms, without too many distractions. Manoussakis makes this point plain, but rather than quote him directly, I would like to try and bend his words in my direction. Rather than resolve the apparent tension in sin or evil by positing a Manichean notion of the good, Manoussakis asserts the goodness of sin and evil revealed in time. This is not as radical as it may seem. I recently asked the question “What is an ethical way to teach ethics?” Socrates answers this question when Meno raises it by rejecting the assumption of the possibility of knowing what is ethical. In De Magistro, Augustine rejects the possibility of teaching entirely. Manoussakis, for his part, follows suit in a clever way. When we admit that we know not what we do, when sin admits to being sinful, when evil can encounter itself as evil, there we find the goodness and the ethics of time. The implications of this idea in moral theology and normative philosophical theories are interesting in their own right, but the phenomenological scope of this book takes us in another more scandalous direction.

The book ends with three scandals. The first two—evil and goodness—have been mentioned to some extent already. The third is grace but becomes more articulate as what Paul calls “the scandal of the cross.”[vi] Here the enigmatic and aphoristic wit of Manoussakis makes its last attempt to call the reader into encounter—the encounter of conversion. One may reject this encounter since it has now modulated from Manoussakis himself to Christ, but this raising of the pitch and register of the erotic appeal seems to be the entire point of the final scandal and, indeed, the book that exists beyond its title. In the cross we find the ultimate body, the broken body that survives the violence of resurrection. After all, Christ’s resurrected body was glorified with all five wounds sustained on the cross still intact and poor saints wear them as scandalous signs of grace. One cannot speak of open wounds as being good and no one can speak of these wounds as being evil. Within Manoussakis’ phenomenology of change presented as the ethics of time, I find a profound and moving meditation on the suffering, sacrifice, and salvation of wounds and woundedness.

Whatever ethics may be, I am fairly certain that it cannot afford to be entirely blind to the moral significance of things, especially the things that go beyond the recognizable the boundaries of moral significance. As we have seen, this would include a genuine ability to understand, as Augustine did and as Manoussakis clearly does, the evil of goodness and the goodness of evil within the interval of time.

Judging something to be morally important is not the same as seeing it as it is. There is a moral field of vision that goes well beyond judgement’s moral capacities. In at least this sense, phenomenology is fundamentally ethical. But this is not always true in practice. Phenomenology as well water is little more than a series of constructive historical notes and debates, on the one hand, and methodological squabbles, on the other. Phenomenology as living water is always opposed to every “ology” and “ism”—including phenomenology and constant opposition. In other words, as its rich history and methods suggest, phenomenology is fundamentally philosophical and this philosophical conception applies equally to phenomenology after the so-called “theological turn.” This turn would be a poor way to try and capture Manoussakis’ project, unless it is to show that every real turn is in some sense a theological one, preceded and anticipated in the Hellenistic tradition. The beginning chapters of The Ethics of Time bear this out in a series of preliminary meditations on movement but they only arrive at their fundamental insight as one allows time—not only the time of duration but above all the time of the interval, the sliding, wailing, and fretless interval—to work across the pages of the book to transform the reading into a dynamic encounter of time in the place of das Ding.

[i] In his Berkeley Center Lecture, “What Are the Roots of the Distinction Between Philosophy and Theology?”, delivered at Georgetown University on April 7, 2011.